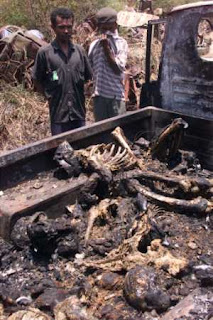 Suai Commemorates Massacre, no Justice Achieved Another one by Sarmento Wargas from Lautem, Los Palos - Suai – The 10th Celebration of the ‘Black September’ Massacre in Suai is attended by approximately 1000 people including prime minister of Timor Leste, government members, parliament members, ambassadors and some other internationals, on Tuesday morning (8/9/09).

Francisco da Costa, a survivor of the massacre ten years ago who saw the killing of the three priests and other civilians, is also in attendance. He said that as a victim and family of the victims, he is happy because the ceremony is successfully done, but also unsatisfied because he couldn’t hear anything important about justice from the leaders during the ceremony.

Justice has been the main concern of the people in Suai. They have been pursuing the justice for all the victims’ families, but everything seems to have no hint.

“We will always fight for justice. Back in the days we said, Death or Alive, Independence. But now we say death or alive, we will struggle for justice,” Francisco said.

The decision to release Marternus Bere, former commander of Indonesian army-backed Laksaur militia, by the ministry of justice upon the order of the prime minister is believed to be due to pressure placed on the Timorese leaders by the Indonesian government, according to the press release of the National Union Party on Monday (7/9/09).

“You also know, for me, this is a tough decision to make but just because of my concern about the future of the nation, the future of its people, I think that the decision has to be made,” said Lucia Lobato, Minister of Justice.