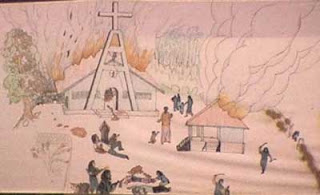 The country's two Catholic bishops presided at the Mass in the south coast city of Suai on Tuesday, which was attended by an impressive line-up of Gusmao's cabinet, along with several thousand Suai residents.

The prime minister later laid a cross on a monument to three priests who were hacked to death by members of Bere's Laksaur militia unit, run covertly by the Indonesian army.

In February 2003, Bere was indicted by the UN's Serious Crimes Unit on 51 counts of crimes against humanity for murders, enforced disappearances, rapes and torture.

An Interpol warrant is current for his arrest.

After enjoying sanctuary in Indonesian Timor for six years, he was arrested by East Timorese police on August 8 after slipping into Suai to visit relatives.

The controversy began during East Timor's celebrations of the 10th anniversary of the UN-supervised referendum for independence in which voters rejected Indonesia by an overwhelming 78 per cent.

Informed sources said that early on August 30, Indonesian foreign minister Hasan Wirayuda, an invited guest, phoned President Jose Ramos Horta to say he would not come unless Bere was freed into his custody during the visit.

Ramos Horta then contacted Gusmao to effect the release, and the prime minister ordered Dili's prison governor to free him after other officials refused to do so without a judge's order.

Wirayuda flew in to Dili in his private plane to attend the independence celebrations, with Bere being delivered to Dili's Indonesian embassy.

However, it is not clear whether Bere was taken back to Indonesia or is still holed up in the building.

Gusmao travelled to Suai two days before the memorial service, convincing the church to postpone it from September 6, the real anniversary of the day when 200 people were slaughtered at Suai cathedral, to allow him time to explain himself to victims' families.

The apparent result was the absence of any reference to the Bere affair by either church speakers or the prime minister during Tuesday's Mass.

Julio Alves Amaral, 49, a family member, said he was saddened to learn of Bere's release and "a bit angry, but anger doesn't get us anywhere".

His 11-year-old nephew Carlos Soares was killed at Suai cathedral, his body never found, and his daughter Juliana dos Santos (Alola) is the teenage girl kidnapped by a Laksaur commander whose cause has been championed by the prime minister's wife Kirsty Sword.

"I don't agree with Bere's release, but what can we do? The common people can't say anything," he said.

He said the prime minister had told families that Bere was back in Indonesia.

"I appreciate your government's desire to develop healthy relations with Indonesia," she said.

"However, I trust that you will appreciate that your government should not avoid its international obligations in the name of bilateral cooperation."