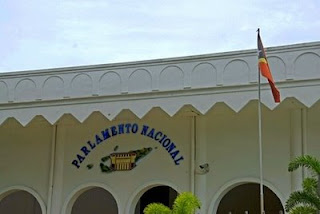 Parliament rejects President Horta’s travel plan, asserts commitment to justice
The Timor-Leste parliament today denied President Jose Ramos Horta’s request to make an official trip to New York, Boston, Denmark and Germany between September 20 and October 5. “This is a victory for the dignity and sovereignty of the parliament, and the people,” declared
Francisco Branco, FRETILIN’s deputy leader in Timor-Leste national parliament, about today’s cross party vote.

In two consecutive votes a majority of the parliament refused to consent to the President’s request, each vote preceded by extensive and at times emotive debate.

“The majority in the parliament today felt that they could not in good conscience consent to the President travelling at a time when there was so much controversy over who authorized the release of the militia leader Martenus Bere,” said Mr Branco.

Many MPs also pointed to the controversy aroused by the President himself, in proposing to grant amnesties for all crimes in Timor-Leste between 1974 and 1999. “This is an issue for the exclusive legislative jurisdiction of the National Parliament. The President has no constitutional powers to the grant such a general amnesty. Most members of parliament felt that the President had too much to explain before he left the country,” said Mr Branco.

“There are too many living victims, and relatives of victims who have died, who have been deeply wounded and offended by both the president’s proposal for a general amnesty and by the release of the militia Bere,” Mr Branco said.

“There is still substantive support for justice and against impunity, and MPs are willing to face up to the President on these issues. This is a very encouraging development in our parliament, one which should give heart to our people that when their interests are at stake, there
can be some consensus,” Mr Branco added.

Today was the 10th anniversary of the Suai Massacre, in which an estimated 200 people were killed or injured. Martenus Bere, who was illegally released from lawful custody on August 30, 2009, on government orders, was the leader of the Laksaur militia who were responsible for this, one of the worst atrocities committed in 1999.

Victims and their families have expressed deep discontent at both the unlawful decision to release Bere, as well as remarks by the President that he proposed a general amnesty for those guilty of crimes in Timor-Leste between 1974 and 1999.