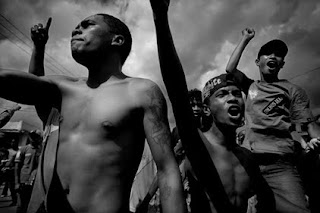 ABUD: Foin Sae Timor, a song calling for brotherhood by the group Timor Youth. That was recorded in 2007, when the country was reeling from repeated outbreaks of violence that began the year before.

Timor today is far more stable - and as we heard in earlier editions of this program, has just marked ten years since the tumultuous vote to split from Indonesia.

The first years after 1999 were tough, but also marked by great hopes for a better future. When violence erupted in 2006 many were taken unawares, and the shock was profound.

Some hope and optimism - and determination - has slowly come back. Antonio dos Santos Costa is studying Chemistry at Timor's national university.

DOS SANTOS: For the future, we want to improve the country, the state, the government, and we want to ask everyone to work together to take this nation forward.

Dili's streets are now full of people - very different from the times of crisis. But could a breakdown happen again?

Aniceto Neves doesn't think so. He's from Ita Ba Paz, a project that works with youth groups to promote peace at the community level.

NEVES: What we've noticed is that their way of thinking has changed. When we've gone with them to analyse their involvement in the crisis, they said that they had been an active part of the problem during the conflict and violence, and they have to make themselves an active part of the solution.

ABUD: Martial arts groups, gangs, informal security groups - they count their members in the tens of thousands. They're part of a shifting landscape which also includes so-called ritual martial arts groups, who have ceremonies they claim give spiritual power. Some were accused of serious violence in 2006.

Coniceto Sanamia is spokesman for Sete / sete, one of the biggest groups. He lives in the Dili suburb Ai Mutin, one of the centres of violence in 2006. He says everything has changed since then.

SANAMIA: When young people began to open up their perspectives, they realised it's better to accept each other, listen to each other, respect each other, so that we can feel the freedom of independence - than to fight each other and live without peace, without any time to spend time with our families, or go to any celebrations.

ABUD: He says young people have realised they were victims of political manipulation - a theme that many people repeat, from taxi drivers to university students.

SANAMIA: At that time the situation in all of Timor was extremely bad. Young people faced many threats, and threatened each other. Political leaders used young people like objects that they could buy and sell and use how they wanted in their own interests.

He says that if any conflict starts up in the future, young people won't fall into the same trap again - they want peace.

People say faith in their leaders has dropped a lot since the violence took place.

Aniceto Neves says youth groups have promoted understanding - and that the public is no longer afraid of them like they were before.

NEVES: The public was very afraid of martial arts groups. This perception changed when they showed their own unity in public with peace marches and demonstrations as cultural and sports groups, and when they put out information about this in the radio or television - perceptions changed significantly.

ABUD: But it's not as simple as that. James Scambury has been an independent researcher looking at youth violence over recent years. He says in some parts of Dili youth groups have certainly put in efforts to promote peace.

But in others - including Mr. Sanamia's neighbourhood of Ai Mutin - the threat of violence remains high.

Mr. Scambury also says even if political manipulation was behind the violence, it's not good enough to blame the leaders.

SCAMBURY: Youth were certainly marshalled by political parties and leaders and paid to carry out violence and to some extent they were manipulated. So I think to some extent that's true. But i don't really buy that. The youth have to take responsibility for their own actions and I don't see that. Talking to them, people are blaming others, they're saying other people and there's certainly a culture of impunity as well that it doesn't matter what they do, nobody will catch them and if they do, they wont' stay in jail.

ABUD: James Scambury points out that violence first broke out because of conflict between the police and the army - and some of those problems haven't been resolved.

There might be more optimism right now in Dili's - and more cars and businesses on the street.

But it's not an optimism that anyone should take for granted. Unemployment is around 60 per cent for young men in Dili. As student Antonio dps Santos Costa says, people are still watching their leaders closely for any false moves.

DOS SANTOS: When our leaders do something that's not right, each of us has to take a stand and say we live together and have to take our country forward, not individual interests. We didn't struggle so that someone could become a President or a Prime Minister. We have to defend our country and work for the future.