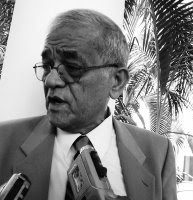 (FRETILIN Media Translation All care has been taken to effect a faithful and precise translation. All assertions as to any alleged errors or omissions will be welcomed and considered.) Please contact Fretilin Media not ETLJB.

Transcript and translation (from Portuguese) of SBS Radio interview with Mario Carrascalao (MC), Second Deputy Prime Minister of the Timor-Leste Government, on 31 September 2009, in Dili, broadcast on SBS Radio Portuguese language program in from Sydney on 12 September
2009:

BW: Now, here on the program we are going to speak about allegations of corruption in Timor-Leste. I was in Dili during the week of the end of August and start of September and interviewed various Timorese leaders and spoke with them regarding this issue on various occasions.

Today on this program I bring the interviews with Prime Minister Xanana Gusmao, with Deputy Prime Minister Mario Carrascalao who five months ago took up the specific role of combating corruption in the government, and former Prime Minister Mari Alakatiri who is also the Secretary General of FRETILIN.

Xanana Gusmao says he is incorruptible; Mari Alkatiri says that he abuses power; Mario Carrascalao confirmed that Xanana Gusmao’s daughter benefitted from the rice contracts, but does not consider that there was any corruption involved.

BW: Here in Dili we are celebrating the anniversary of 10 years post the referendum and we are with the deputy prime minister of Timor-Lest, Engineer Mario Carrascalao who has been the president of the PSD, Social Democratic Party, which is part of the Parliamentary
Majority Alliance, which is governing this country. It is with him that we are now speaking.

MC: Good afternoon. Everything is well thank you.

BW: It has been five months now since you took up the post of deputy prime minister with the specific role of combatting corruption or working in the area of, of, preventing corruption. During these last months the fourth constitutional government, led by Prime Minister
Xanana Gusmao, which your party is a part of, has been the target of many allegations of corruption, as the FRETILIN government was during its time subject to an immense amount of allegations of corruption. To this day there has not been a case proved in Timor-Leste. Does
that mean there is no corruption here?

MC: Well. Yes there is corruption here. It has existed practically since the beginning of the Indonesian occupation.

BW: One of the cases that been has spoken about a lot in Australia in the last few months is the case involving rice, with allegations that the Prime Minister Xanana Gusmao wanted to award a contract to a firm in which his daughter was a shareholder. On the one hand there are
documents in existence that show that she was a shareholder with 11% at the time, but there are other documents saying that she was not a shareholder at the time. Is this case being investigated?

MC: I don’t consider this to be a case of corruption because others were not disadvantaged to the advantage of the Prime Minister’s daughter. Perhaps if other people had been disadvantaged, but this was not the case. He decided to distribute the projects to seventeen
business people, seventeen businesses, to different ones. Now, his daughter was a part of one of the businesses. Now. If, if this business had been advantaged, others disadvantaged. I don’t know if he knew that his daughter was or was not, as we say, a shareholder of this business. This I don’t know. I asked him one day, and he said, “no, I am not going to…..” you know that the projects that involve a budget of more than one million dollars, it is the Prime Minister that
has to sign the contracts. Can you see what it would be like for the Prime Minister to have to review seventeen, that is to say, contracts, that is to say, these are extensive processes. Well I don’t know about that. The daughter, that is to say, is not a child who still lives at home with her parents, that is to say, she has her own life, has her own life. So, there, I am not convinced, not convinced, to, to, that…….Now, there are other types, other corruption that has occurred. I myself in this case of the daughter, I asked the Prime Minister, “I want to know the truth regarding this. Sir knows I cover this area, I want to know.” He said, “Think what you like but I did not do this because she was my daughter. That is to say, she is one of the seventeen businesses”, that is to say that she is a part of, a project I think worth fourteen million or forty million dollars, that he had distributed between seventeen business people. To be clear, I
did not do so that, that because I do not have a business.

Had I had a business, that had been prejudiced, perhaps I would have tried to look at it in another way. But, before I was interviewed by ABC television who was here with me, I did not know about this case. Here
in Timor this was not a case that was even being talked about. It was not a case like this. There are other much more important cases in Timor that deserve…..this case if it had not been the daughter, had been another person in the same circumstances, he daughter, that is to
say, only benefited because she was a member of this business. Now if she had been the only owner, the principal owner of the business, and other businesses, other businesses had been pushed aside to benefit her, then, there yes, I would consider it an act of trafficking of
influence, it would have been an act, that is to say, by the Prime Minister that would have breached the law.

I have many doubts in this case from the aspect that I don’t see a clear breach. Now, there is, this is what people do not cite is that a law exists, that is a law on officeholders, former officeholders, that is law number seven of nineteen seventy six, if I am not wrong, or something like that, which says that the relatives of those in government cannot be awarded projects. Now the question I have is this.

Did the Prime Minister know his daughter was a participant, was a shareholder of a business? That he had time to see in the other projects as to who were the specific shareholders, and had made inquiries? Then the projects would never move forward, and the purchase of rice was a very special issue, because it was done at a time of great crisis. Great crisis and it was urgent. There was not even a public tender. There was no public tender. The Minister for Tourism and Commerce ended up having to call together the business people and say, you each have to take X. You make your proposals. You will get, lets say two to three million each per business person, I think it was this. This case is not considered in Timor to be one of corruption. It is not. It is not.

Now, there are many cases of individual corruption, many, that are, that is to say, like where the state is disadvantaged, benefits going to third parties, yes, benefits going especially to, those who are corrupt. This case perhaps not.

BW: Engineer Mario Carrascalao, deputy prime minister of Timor-Leste, thank you very much for your availability in speaking with us.

MC: That’s nothing. Always at your service. Always available. (End of translation/transcript)