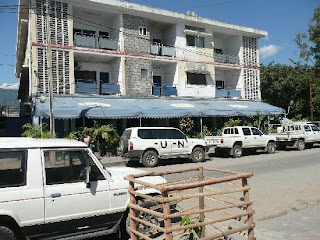 Dili, Tempo Semanal 21 September 2009 Edition 157 Minister of Justice Overrides Tribunal to Modify City Cafe - Institutionally, the Ministry of Justice (MJ) and its branch, the National Directorate for Land and Property Registration has enough power to take notifications of evictions to all citizens who occupy the state's assets (for example, a house).

But according to legislation number 1/2003 (chapter three article seven), the MJ does not have power to evict City Café's owners because it is not the state's property.

According to decree 32/2008, the MJ's eviction is worthless.

Despite this, the MJ has used its institutional power to evict Mrs Rita Fatima Lopes Tsan da Costa from City Café. The aggravation this caused has led to a case being lodged with the Dili District Tribunal to confirm the rights of Timor-Leste's citizens who receive such notifications.

The DNTPSC sent the notice of eviction (number 522/272-473) on 29 April 2009 at the MJ's direction, which stated Mrs Fatima had not been successful in her attempts to retain the establishment.

Mrs Fatima was initially asked to voluntarily vacate the premises according to an established schedule, but was eventually forced from City Café through orders from the MJ.

Polemics such as this are also occurring to current occupants of Hotel Tourismo, according to a Letter of Notification Process (number 522/688-875) from the DNTPSC on 10 August 2009 that has asked occupants to vacate the hotel for a period of 30 days from that date.

Based on documents which Tempo Semanal has acquired, on 2 January 2009, the MJ­through DNTPSC­gave final notification to City Café's occupants to vacate the premises in four days, but they did not want to because they were waiting for a decision from the Tribunal.

Although the Tribunal is yet to make a decision on the case, on 8 June the DNTPSC and a security institution forced Mrs Fatima from City Café.

This attitude shows that the Minister of Justice has used her power through DNTPSC to force occupants from this establishment. A submission to the Tribunal by the legal representative for the City Café building's tenants, Rita Fatima and Ted Lay, stated the MJ has contradicted Article 10 (32/2008, points 1-3) and Article 11 (1/2003, points 1-7) of the Civil Code.

According to chapter three, article 7 of law 1/2003 which regulates administrative evictions, the MJ doesn't have competence to conduct evictions in this way, because City Café was not property of the state; as such, the eviction is based on false terms.

This eviction has also not followed appropriate process because the DNTPSC gave only four days' notification before it required the tenants to vacate the premises, alluding to a token-esque timeframe to comply with regulations.

"For these reasons, on 31/03/2005, the DNTPSC through its interim director Horacio da Silva, gave notice to City Café's occupants that the Government will not continue its contract because it recognises this as private property; the premises occupants must recognise their contract of payment with the owner," it continued.

From 2005, City Café's tenants commenced a skewed contract with the building's owner, Lay Min Ing through his son, Bobby Lay, to negotiate rent prices, but did not manage to reach a clear agreement.

"Because a clear agreement has not been reached about the price to be paid, Bobby Lay has taken civil action at Dili District Tribunal, and the Tribunal has already taken note of these matters," said Rita Fatima regarding the matter.

This submission also declared that until now, the Tribunal has not passed judgement on this case; so why did the Minister of Justice evict City Café's tenants? The facts state that the Minister of Justice's behavior does not set a good example for the future, because this is an example of discrimination against the land process and all private residences which currently are registered with the Tribunal.

In addition to this, Article 26 of the Constitution of the Democratic Republic of Timor-Leste gives all people the freedom to ask a tribunal to protect and defend their rights and legal positions, but the MJ has tried to use its power to contravene the judicial process and oppress the small people.

On 31 August 2009, Rita Fatima delivered a letter to Antonia Verdial Sousa, director of DNTPSC, attempting to prolong the DNTPSC's decision to renovate City Café on grounds that the Tribunal had not yet made a judgement; yet the DNTPSC continued with its plans to renovate the premises, stating that the decision was that of its owner, Bobby Lay. Bobby Lay had already written a contract with a man from Sagres Hotel who stated his name is Eduardo, but until now there has not been a response from DNTPSC regarding this.

In response to questions on this topic, Rita Fatima last week informed Tempo Semanal that those in her local area, Bairru dos Grilos, were very sad at the Minister of Justice's decision, which does not have a sound legal basis. According to Rita Fatima, the Government stopped collecting tax from City Café as a business because it recognised the building as private property, and consequently left rent negotiations to the owner and tenant.

"We've paid tax to the State for almost two years at a rate of US$503.00 per month. The Government may not say that we've not paid tax because we have receipts from [bank] Kaixa Jeral de Depozitu," stated Rita Fatima. She also believes that Bobby Lay has taken up the case at Dili District Tribunal because he was unsuccessful in increasing the rent charged to City Café.

"We, the occupants, will continue to wait for a decision from the Tribunal, but why has the Minister of Justice forced us out?" she continued.

"Bobby Lay recently declared that this property is his father's (Lay Min Ing), so we made a contract with them, but until now I've only heard that this is the property of Ted Lay's father. We stopped the contract with Bobby Lay because Ted Lay is my business partner," she explained.

Although Bobby Lay has lodged the case with the Tribunal, based on an official bulletin from during the Portuguese occupation, the property which pertains to City Café is owned by Ted Lay's father.

"The letter of eviction that was sent to us isn't from the Tribunal, but from the Minister of Justice because the Tribunal hasn't yet reached any decision," said Mrs Fatima.

"The [former] Minister of Justice Domingos Sarmento recognised that the property we refer to is that of Bobby Lay's father, and we ask that they give back the money which we've used to restore the building. Only then will we leave, but because they don't want to, we won't leave; as a result, they've taken this case to the Tribunal," said Mrs Fatima.

"Although we already have the letter of eviction from the MJ, we continue to hope for a decision from the Tribunal, because this case has already been registered with the Tribunal," finished Mrs Fatima.

Mrs Fatima has extended her willingness to reply with the Tribunal, and also is ready to present her testimony when it calls.

"If we win at the Tribunal, we'll certainly demand that Bobby Lay pays back our name," claimed Rita Fatima.

In other areas, the former Minister of Justice, Domingos Sarmento, conveyed in his house to Tempo Semanal that, "The MJ has definitely stopped the the contract with Rita Fatima because Bobby Lay claimed that the property is that of his father, Lay Min Ing, and has asked to hand over the property to its owner; but they have taken this case to the Tribunal because she doesn't want to".

"According to my comprehension, the eviction notice may only apply to State property, not to private property; because of this one should ask the Minister of Justice to clarify the reasons and legal base for her wanting to issue this notice," said Mr Sarmento.

Last Wednesday (09/09/09) at 3:40pm, a Tempo Semanal journalist visited the DNTPSC's office to ask clarification about the City Café case which has thus far become polemic – yet the director, Antonio Verdial de Sousa did not want to give in-depth commentary about this issue. With an angry face and loud voice he told that things the DNTPSC does indeed follow the law and, because of this, the DNTPSC continues to stand strong in its principles.

According to Verdial, this case at the Tribunal is a separate matter and that it should definitely not be mixed with any others: "But those who aren't satisfied with this decision may deliver a case through tribunal processes," he challenged.

After hearing the DNTPSC director's words, the Tempo Semanal journalist tried to record them, but the director shouted to turn off his recorder.

Despite this, the Tempo Semanal journalist continued his attempts to ask about the documents delivered by Rita Fatima last Friday, but the DNTPSC director said it was not his area to deal with at all and that he'd deliver them to the Minister of Justice.

Last Thursday (10/09/09) a Tempo Semanal journalist inquired with a judge at the Dili District Tribunal about this case, who wished to remain anonymous. He smiled as he said that some prats of the Minister of Justice's work were done correctly, but the Tribunal will see to it that things follow the law.

This Tempo Semanal journalist consequently wished to confirm the situation from Bobby Lay's point of view, so last Thursday afternoon (09/09/09) he visited him at his workplace in Colmera, but a colleague said Bobby had left for Singapore. According to Mr Eduardo from Sagres, they do not have anything to do with the problems of City Café case at the Dili District Tribunal.

"We commenced rehabilitating the hotel based on the five-year agreement which we made with the landlord, but when a problem arises it is up to them to resolve it, not us," said Eduardo from Hotel Sagres in Pante Kelapa.

He added that if the rehabilitation process was to end on schedule, the hotel would commence operation on 1 October 2009. "When I received an email from Bobby that said DNTPSC has already granted the property to him, I felt that there wasn't a problem," he said.

Mr Eduardo said, "There were accusations that before the tenants intended to leave the premises, they destroyed part of the facilities inside; but in a telephone conversation on 12 September 2009, Rita Fatima informed Tempo Semanal that these accusations are not true".(ts)

Posted by TEMPO SEMANAL at See further
at Thursday, September 24, 2009

I know very well Mrs Fatima, Australian citizen and lived in Darwin with her husband who was colonial military Portuguese in East Timor.
She went to East Timor with her husband in 1999 for business , purchase of land and sales. She acted like mafia, she wanted to enrich easily because the situation was favourable. No documents and no contacts with the Government ,she did direct contact with Timorese to purchase with a low price.
She had problems already with the previous Government due to State land purchase without authorization. The City Cafe was rented by Government to an Portuguese after that passed Mrs. Fatima but she isn't owner of building and the adjacent building she had rented a India business man.