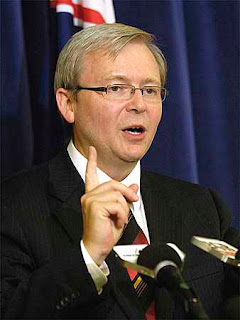 Posted: 11 September 2009 1951 hrs SYDNEY : Australian Prime Minister Kevin Rudd has shrugged off a warning from Indonesia's president that a war-crimes probe into the 1975 killings of five journalists could damage ties.

Rudd said the row over Australia's surprise 'Balibo Five' investigation was just one of the "bumps in the road" encountered in relations between two countries.

Australian police announced the probe on Wednesday, nearly two years after a coroner's investigation and just weeks after the release of "Balibo", a hard-hitting film depicting the killings.

"Obviously our friends in Jakarta have been surprised by this because it's been quite a long time, but I believe we can manage these challenges," Rudd told public broadcaster ABC late on Thursday.

"There are bumps in the road with most relationships around the world, and I think we'll have to manage this one as well."

The five Australian-based journalists were killed by troops in the East Timor border town of Balibo as they covered an invasion by Indonesia that led to a brutal 24-year occupation of the former Portuguese colony.

A 2007 coroner's investigation found they were murdered in a bid to keep the invasion secret. Indonesia says the five were killed accidentally during fighting with Timorese rebels, an explanation accepted by successive Australian governments.

Indonesia's President Susilo Bambang Yudhoyono said the new probe was contrary to the best interests of relations with Australia, which have improved markedly in recent years.

"Frankly, this of course goes against our desire to look to the future. The desire of Indonesia and East Timor is to end all those things that harm our relationship, through our decision together to form the CTF (Commission of Truth and Friendship)," Yudhoyono said on Thursday.

"This is important, so the good or even great relationship between Indonesia and Australia isn't harmed by problems that have arisen because of a mindset or way of thinking that, in our opinion, is inaccurate," he said.

The 2007 coroner blamed members of Indonesia's special forces for the killings, including Yunus Yosfiah, who rose to become the country's information minister in the late 1990s.

East Timor President Jose Ramos-Horta, a rebel leader at the time who investigated the deaths, said in July that at least one of the five victims was "brutally, brutally tortured". - AFP/ms