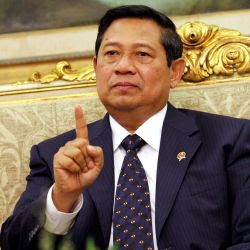 September 10, 2009 The Jakarta Globe SBY: Balibo Five Probe a Step in Wrong Direction - The Australian Federal Police’s decision to investigate the “Balibo Five” incident in East Timor in 1975 is a backwards step that could harm relations between Australia and Indonesia, President Susilo Bambang Yudhoyono said on Thursday.

Yudhoyono, speaking ahead of a cabinet meeting at the presidential office, said the AFP’s decision to launch the war-crimes investigation into the deaths of the five journalists was contrary to the spirit of ending the dispute between Indonesia and East Timor.

“This is not in line with our spirit to look to the future between Indonesia and East Timor to end all issues that disrupt the relationship between the two countries, which agreed to form the Commission of Truth and Friendship,” Yudhoyono said.

The president added that at the time, Australia even agreed to the establishment of the CTF and worked to end the dispute by offering several recommendations.

“This is important, so the good or even great relationship between Indonesia and Australia isn’t harmed by problems that might have arisen because of a mind-set or way of thinking that, in our opinion, is inaccurate,” Yudhoyono said.

He also said Indonesia had been the victim of past abuses during the Dutch colonial period, but added that the country did not dwell on the past.

“Our friends in Jakarta have been surprised by this because it’s been quite a long time” since the journalists died, Rudd told the Australian Broadcasting Corp., noting the decision to investigate was initiated by independent police chiefs.

“But I believe we can manage these challenges. There are bumps in the road with most relationships around the world and I think we’ll have to manage this one as well.”

Yunus Yosfiah, who led the Indonesian troops into Balibo at the time of the killings, on Thursday refused to comment on the latest developments.

“Please direct your questions to the defense minister. I don’t want to talk about it,” the former minister said.

The 65-year-old man served as information minister during the short-lived presidency of BJ Habibie and served as a lawmaker for the United Development Party (PPP) from 2004 to this year. He is now vying for a post at the Supreme Audit Agency (BPK).

“Show me the files if you want my answer,” Yunus said at the parliamentary compound shortly after attending a test for the BPK post. “I have talked about this so many times and I don’t want to say the same thing again.”

Separately, Defense Minister Juwono Sudarsono maintained the government’s official position that the journalists were killed in crossfire between Indonesian forces and East Timorese Fretilin soldiers, because the Indonesian government and the Australian police had already been briefed on the matter.

“It is just that at any time there may be parties in Australia who reopened the case for local political consumption, usually NGOs, but this time it was the police,” said Juwono.

He added that the case was only a local issue, as the families of victims and government officials had looked into the matter years ago.

Juwono added that when he served as ambassador to Britain, he met with relatives of some of the victims and explained that the individuals were killed by crossfire between the Indonesian Army and Fretilin.

“It is a part of an open political system where any state, party or official can open anything [they see as requiring an explanation],” he said. “It is a local issue and we should not respond.”
-----
Image added by ETLJB: President Susilo Bambang Yudhoyono - Is he the new Indonesian democrat? Or part of a shadow play of deception that seeks to conceal the true nature of the Indonesian polity that is still essentially undemocratic, lacks understanding of the rule of law and justice and refuses to face the realities of the terrible crimes commiteed by the Indonesian state and its agents in East Timor and throughout Indonesia?
at Sunday, September 13, 2009