Equality for women and girls in East Timor 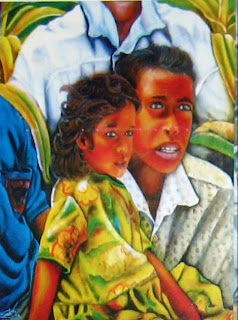 Source: United Nations Radio Date: 28 Aug 2009 Listen to the Interview - It's been ten years since the people of East Timor, as it was called in 1999, voted for independence from Indonesia. In the course of those 10 years, the country has seen more conflict with many displaced within their own country. In the midst of the turmoil, women have been working to end violence and other violations of their rights. Gerry Adams has more.

NARRATOR: Abati Pereira studied nursing in Indonesia, because she wanted to care for the sick.

PEREIRA: I started as a community health worker, and then I saw that it was not enough just to be a community health worker, because I see a lot of the inequalities, especially when you look at the women's to men's and the poverty impact to women, it's all poverty in women's faces. So health and education, safe drinking waters, literacy and free primary schools for women... it has to be changed. And that's all the priority that if I had been a prime minister, I think that is the most priority I will do.

NARRATOR: Abati is a programme manager with Rede Feto, which means "the women's network" in the local language, Tetum. And while she's not her country's prime minister, she is working to influence her country's policies towards women. She has seen firsthand how difficult the lives of women and girls can be in Timor Leste.

PEREIRA: When you have a father who have no such a sustainable income and your mother was pregnant, and your little brother that has nothing to do after you go back home after school, and you have just to feed some livestock and you feel like, why are they so poor. And when you have a little sister, and she's been forced to marry and she has nothing to complete her school, because that's the only way the family could get some inheritance. For instance, like when she gets married, she will have some dowry that will sustain the family with some livestock or maybe some lager amount of money; and that maybe, will also cover her brother's school for the next ten years, so she has to suffer the role. And when she went through early marriage, early pregnancy, and her life is much shorter.

NARRATOR: We met up with Abati when she was in New York to present the NGOs report to CEDAW, the committee that monitors how countries are complying with the UN Convention on the Elimination of Discrimination against Women. As she presented her country's report to CEDAW, Idelta Maria Rodrigues, Timor's Secretary of State for Promotion and Equality, said a male-dominated culture and years of conflict had taken its toll on women's equality. But there has been some progress, including a recent recognition that domestic violence is a crime.

RODRIGUES: The new penal code just passed three months ago, so it is very new; but we are just now working hard to pass our domestic violence law as soon as possible this year. This is one of the... how to prevent the gender-based violence in Timor-Leste, and also we know that many women are suffering of domestic violence, so for this matter the government is paying more attention for the domestic violence law to pass this year.

NARRATOR: And while they wait for the passage of the domestic violence law, women in Timor Leste have been busy trying to help victims of violence.

NARRATOR: Abati Pereira is concerned that internally displaced people, or IDPs, who've returned to their villages, especially women, will get the necessary government assistance to allow them to re-start their lives.

PEREIRA: The women living at the IDPs, they have now returned to their home village and they felt that we didn't give them the government subsidies to reintegrate back to their community and now able to get their own home back. They haven their own societies that they trust, and they have to believe that the reconciliations will bring them more peace situations. They have to feel like the communities that they are living now is no more their enemies, and they are one community that has to live in one society.

NARRATOR: Back in Timor, the NGOs and government officials will translate the committee's recommendations into Tetum, Portuguese and Bahasa Indonesia in order to reach as many people as possible. That is one way, says Idelta Maria Rodrigues, the country is committed to making things better for women.

NARRATOR: For UN Radio, this is Gerry Adams reporting.