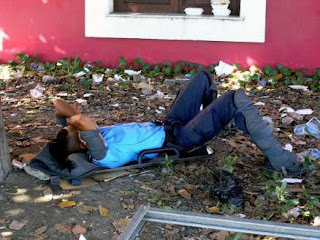 I/ The first Basic Recruit Class (BRC) was conducted at the PTC on March 2000.

Since then Basic recruit Class had been going on continuously, only suspended during the 2006 crisis (there were 4 BRCs [Class 60-63] then). These last 4 classes only resumed mid 2008.

Since the last Basic Recruit Class was Class 63, it safe to say that the current 3,103 registered PNTL members is all Police Training Academy alumni.

1. Police Commissioner Luis Carrilho was the first PTC Director during the first Recruit Class in 2000.

1. Provisional Certification Courses: These are short-term refresher courses for all PNTL levels— Agennts, Sub-Inspectors, and Inspectors. In UNMIT mission, this is mandatory for the certification purposes. Each training aims to provide the PNTL with the basic professional skills according to the level he/she is going to serve. All the programs address UNMITâ€™s cross-cutting issues, such as Human Rights and Gender Awareness/Sensitivity.

2. Firearms Training (Certification Course): This training is mandatory for all levels/ranks in order to be certified/re-certified to carry side arms. The course focuses more on safe weapon handling, as well as the principles on the use of force.

3. Specialized Training (Transition-related Courses): The goal is to enhance the core competencies of police officers to be able to independently and effectively run their respective specialized units during the transition phase of the mission. Equally important is to ensure better understanding of their specific roles and responsibilities within their specialized units, as well as the legal provisions that support their functions. Examples of these courses are Close Security Protection, Traffic Management and Accident Investigation, Disciplinary Investigation Course (PSDO). Most of the courses are Train-the-Trainer type, and most commenced in July 2008.

IV/ Training of Trainers (for PTC instructors only). This TOT is mainly to develop/enhance the basic training competencies of PTC instructors. (Note: Some of the specialized courses adopt the TOT modality, thus, with always representatives from PTC (e.g., CSP, PSDO, Traffic, Human Rights, etc.)

1. Basic Recruit Course (Class 60-63). This is a continuation of the previous Recruit Course, which was stopped during the 2006 crisis. This course was only resumed in 2008.

2. PNTL Re-training. Considered a national priority since 2008, the goal of this intensive 2-3 month course can be captured by the â€œsound mind, sound bodyâ€ philosophy. The course not only aims to refresh PNTL knowledge and skills in democratic policing. As often stressed by the PTC Commander, Carlos Almeida Sousa JERONIMO, equally important is to re-invigorate the PNTL members through sound physical fitness, reinforced sense of discipline and professionalism, and renewed team spirit in order to foster â€˜unityâ€™ amongst them throughout the country.

3. Others. Apart from the above courses, some PTC-TU has also been collaborating with other UN units/departments and external agencies (e.g., UNICEF, UNFPA, IOM, UNMIT-HRTJS, TLPDP) in conducting specialized courses for a select group of PNTLs. Courses are not necessarily classified as transition-related, and mostly commenced in the early past of the mission. Examples are Riot Control, Special Task Force, Basic Law, Human Trafficking, Human Rights, EOD,

V/ Overview of the support received from bilateral actors/programs

Â· Australia (thru TLPDP), Japan, and most recently Portugal have been the major players giving advisory, financial, and other resource support to PTC. Apart from these 3, UN agencies (e.g., UNFPA, IOM, UNICEF) have been largely our collaborators.

Among others, TLPDP has been actively offering courses in-country and overseas for PTC instructors.

Japanese government, thru UNDP, provided full funding for the development and production of PNTL Textbook and Handbook. Australia /TLPD was involved in the actual writing of the books.