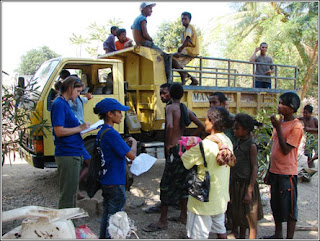 At the press conference the Minister also announced that all the families have now left Metinaro IDP camp, and this last tented IDP camp was officially closed on 22 August 2009.

The Secretary of State for Social Assistance and Natural Disasters, Jacinto Rigoberto Gomes, explained that IDPs living in the Transitional Shelters would receive recovery packages based on the amount of damage to their house. Occupancy of a unit in transitional housing does not automatically entitle residents to the maximum amount of recovery package. Those who had moved into units in the Transitional Shelters are not entitled to receive a recovery or reintegration package.

The Minister of Social Solidarity said “I would like to thank the IDPs, receiving communities, all our partners, the Chefe Sucos and Chefe Aldeias, PNTL and UNPol for helping MSS to successfully implement the National Recovery Strategy and ensuring that IDPs have been able to peacefully reintegrate into their communities. Within one year and a half, working together, we have managed to close all 65 tented IDP camps, and soon we will have closed all four Transitional Shelter sites. I sincerely hope that after the closure of all the camps and Transitional Shelters, the situation in all the receiving communities will continue to remain stable, and that all of you can help contribute to the development of Timor-Leste.”

MSS staff are currently working to resolve the cases of all the registered IDPs living with host families so that they can receive their recovery packages by the end of 2009. No new registrations can be accepted. Those IDPs living with host families must follow the same process as IDPs who lived in camps – that is, their house must be verified to assess the level of destruction sustained in 2006/7, following which the recovery package will be socialised to them. The MSS/UNDP Dialogue Teams continue to assist those who are unable to return because their house is occupied, or because there are ongoing issues with the receiving community, to try to resolve these problems through dialogue.

As a result of the 2006 crisis, more than 150,000 people fled their homes and 65 tented IDP camps in Dili, Baucau and Ermera were established. In late 2007, to provide transitional housing for people leaving the camps, the Norwegian Refugee Council, together with the Ministry of Public Works under the former Government, built six Transitional Shelters in Dili district. Four of the Transitional Shelter sites still house IDPs – Qarantina, Tasi-Tolu, Becora Market, and UNITAL I &II. The government aims to assist the people in these sites to return to their homes by 6 October 2009. With the return of the IDPs from the Transitional Shelters, more than 14,400 IDP families will have received a recovery or reintegration package under the Hamutuk Hari’i Futuru National Recovery Strategy.