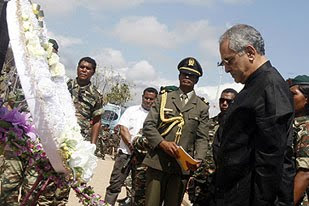 Al Jazeera 2 September 2009The government of East Timor has defended its decision to release an Indonesian man indicted for crimes against humanity during the country's struggle for independence in 1999.

Martenus Bere was moved to the Indonesian embassy in Dili on Tuesday following an official pardon.

Jose Ramos-Horta, East Timor's president, said restoring good relations with Indonesia was more important than "prosecutorial justice" and has promised not to let his country be used as an "experiment" in international justice.

The move came in advance of national celebrations commemorating 10 years since East Timor, also known as Timor-Leste, won independence from Indonesia in a UN-backed referendum.

Bere was detained about five years after being indicted in 2003 for his role in the Suai church massacre in which up to 200 people were killed.

The move to free Bere drew strong criticisms from the UN and human rights group who said that it sent out the wrong signals.

Marie Okabe, the spokeswoman for Ban Ki-moon, the UN secretary-general, said Bere's release would be in violation of Security Council resolutions.

"The UN's firm position is that there can be no amnesty or impunity for serious crimes such as war crimes, crimes against humanity and genocide," she said.

Observers say the pardon may help ease tensions with Indonesia but it will increase domestic anger over impunity.

Jose Teixeira, an MP and Fretilin spokesperson, told Al Jazeera the government had capitulated to diplomatic pressure from Indonesia by interfering with the judicial process.

"We believe that is a totally wrong and counter-productive way of addressing these issues… which should have been pursued through legal channels" instead of violating the court order for Bere to remain in jail pending trial, he said. "There are very serious legal ramifications."

East Timor, a former Portuguese colony, was invaded by Indonesia in 1975. An estimated 180,000 people died during the bloody occupation, and the UN estimates about 1,000 died in the mayhem that surrounded the 1999 vote for independence.

Image: Ramos-Horta, right, has come under fire for putting diplomacy ahead of justice
at Sunday, September 06, 2009