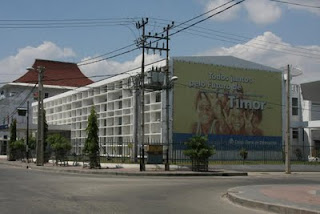 Tempo Semanal Saturday, 26 September 2009 - The Director-General Ajunto da Caixa Geral de Depositios, Succursal Banco Nacional Ultramarino (BNU) Timor-Leste, Mr. Artur Amaral Jorge was seen in Nicolau Lobato National Airport today. He was acoompanied by his wife and friends. Today Mr. Artur departed Timor-Leste for Singapore, and onwards to Portugal. He leaves after being foiund guilty of being in breach of Regulamento 2000/8 Article 36 No 3 Line A.

Mr. Artur lost his post because of complaints made against him on 13/04/2009 by Joao Alves and Luis Oliveira (shareholderss in Pualaka Petroleo) to the Banking and Payments Authority (BPA). The BPA verified the irregularities made in the transaction of $3,029,000.00 USD from the bank account of of Pualaka Petroleo Lda. to bank accounts held in the names of Atauro Oil, and Mau Huran Printing without appropriate authorisation. The Third Shareholder in Pualaka Petroleo is Americo Lopes (click here and here for related stories), husband of Minister of Justice Lucia Lobato.

Tempo Semanal was told by its source close to the BNU in Dili that the BPA did not give opportunity to Mr. Artur to defend himself against the accusations.

While Tempos Semanal tried to get a comment from Mr. Artur at the airpor he refused to comment. According to Tempo Semanal sources Mr. Artur has registered a complaint against the Banking and Payments Authority (BPA).
at Sunday, September 27, 2009