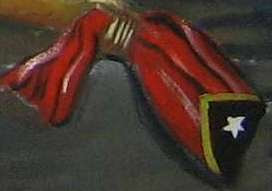 By Sarmento Wargas from Lautem, Los Palos. The Silent Voices Longing for Justice Is there a justice for the people…? - SUAI: After ten years of independence, a celebration is held in memory of all victims of the 'Black September' massacre in Suai church where hundreds of people died, nothing significant is achieved by any family members in the District.

Suai is located in the southern part of Timor Leste, and it takes about eight hours to get there from Dili, the capital of Timor Leste. Besides the mountains and rivers along the way, there are a lot of panoramic views that will make you feel better after that long trip from Dili.

Surrounded by hills and rivers, right in middle of the Suai town, an unfinished church was once the witness of a cold blooded massacre that killed more than 200 people on September 6th, 1999. The attack happened in about nine o’clock in the morning. The military backed militias started shooting at the church where many people hid from the brutality of the militias around the town. Along with the victims, three priests were also murdered in the church.

After ten years, families of the victims remain silent and they keep their feeling of hatred and upset in their mind. Government, international and national NGOs have been visiting the place, making a lot of promises but none of them is actually done.

Manuel Soares “Babalai”, father of a murdered son and a kidnapped daughter told us that he doesn’t trust the government or any other organizations who are trying to provide helps. His daughter ALOLA is now in West Timor and her name has been used as the name of a famous organization based in Dili, The ALOLA FOUNDATION which is led by Kristy Sword Gusmão, wife of the recent Prime Minister Mr. Xanana Gusmão.

“They use our names to get money, but no one cares about what happen to us. They said that they are going to build our houses but as you can see there is nothing here. They only promise and promise but they do nothing” Manuel said.

After this long time, they are still expecting that all the militias would be brought to justice but until now most of them are still free like animals at large and cannot be caught. They also insist the government to strengthen law and justice in the country. According to Manuel, the law in Timor Leste is only created for the poor people and not for the betrayers.

"A few weeks ago, police had made an arrest to a former militia leader his name is Marternus Berek, but why do they let him free again? If we make a mistake police will come an arrest us and we will imprisoned, but what happens to them? They are the killers," said Babalai.