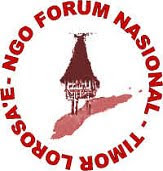 Non-Governmental Organizations that come together under the Timor-Leste NGO Forum, are grateful to Committee C on Economy and Anti-Corruption in the National Parliament for the opportunity given to civil society to share our perspectives and ideas about the Budget and Financial Management Law which was approved by the Council of Ministers on 14 August 2009. We hope that our perspectives will assist you in making your decision.

First of all, we from civil society appreciate the Government’s initiative to create this Budget and Financial Management law, for the first time since Timor-Leste enacted its Constitution of the Republic, with hope that this Law can represent Government and State initiatives to guarantee a sustainable economic life for current and future generations. Although, we found it difficult, because this draft law is only available in Portuguese and English languages, but we tried our best to give ideas to improve this law. We offer the following observations and opinions about this Law:

2. Fundamental reason for the Government to borrow. At the moment, Timor-Leste has petroleum receipts around US$5 billion. We suggest that the Government needs to explain the fundamental reason for borrowing, because this law only defines how to borrow, and how to manage this debt in the general state budget. With the current situation in Timor-Leste, it is not yet necessary to take a loan from an international financial institution or another nation. We also recommend that the National Parliament has the right and obligation to audit and monitor, and must discuss, know about and ratify loan agreements between the Government and financial institutions or nations, including the conditions of the loan and how it will be repaid, limitations on increasing the debt, the capacity to pay it back, and the consequences for Timor-Leste if it is not paid.

3. Capacity to pay back loans, and sources of revenues to pay the loans. Many nations in the Third World have fallen into financial crisis because they do not have the capacity to repay loans, because the borrowed money wasn't used to develop sustainable sectors of their economy which produced a return. The National Parliament can insist that the Government must demonstrate its capacity to repay the loan without a heavy burden on future generations. Government also must show the results from executing the state budget in investment in sustainable development and their good returns, the conditions for using the money, and real indicators of implementing the development program, so that Timor-Leste is not made to fall into the resource curse, with a heavy, long-term debt.

5. Auditing. Article 129 of the RDTL Constitution defines that a High Administrative, Tax and Audit Court should be created, and Article 145 (State Budget) gives it the responsibility to monitor budget execution. But this Law does not specify to immediately create this High Court, so that it can audit the state budget and other fiscal issues.

6. Learning from Past Experience. In the 2008 Budget Adjustment (rectification), National Parliament approved money for the Economic Stabilization Fund which was eventually ruled unconstitutional by the Appeals Court. We suggest that Parliament should reflect on this decision before approving this law, especially Article 29 about Special Funds. As the auditing organ which is assigned great auditing responsibilities under the Constitution, Parliament must have the right to audit Special Funds, and to avoid secret funds within the state budget.

7. Opportunity to take advantage. Although Articles 17 and 18 define Public Debt and borrowing, we do not know when and how the Government will implement the policies in these two articles, but this law already gives permission for Timor-Leste to borrow money from international financial institutions, opening a path for current or future governments to use power for private or personal interests, increase opportunities for corruption, with negative implications for the nation’s future.

Article 13 (Investment of state monies). That the Finance Minister should listen to the Council of Ministers to temporarily invest money which has not yet been spent. But there is no explanation of how to reconcile the budget invested in this way with the budget not yet spent, because this budget is in categories in the consolidated budget, not in a special budget category. How can we assure that there will be no risk from temporary investment, and if there is a risk, how is it to be assigned?

Article 17 (Guarantees and borrowing by the State). We recommend that Parliament uses its powers so that Parliament has the right to know and approve debt agreements, the conditions for borrowing and repayment, the schedule for repayment and an estimate of how much it will cost. The process of writing this law also shows lack of consistency and seriousness from the organs which prepared this state document, because Article 17 has no sub-article 6. We suggest that the National Parliament eliminate this article, because Timor-Leste has enough sources of revenue to finance our state.

Article 18 (Loans by the State). This article is very weak and will damage economic sustainability and economic sovereignty in Timor-Leste. This law does not clearly explain how the government can lend money to people or institutions, and who will be responsible to give loans. This article opens the way for some state officials to borrow for their families or companies according to their own wishes, and this law feeds corruption, collusion and nepotism in Timor-Leste. Point 2(a) states that the conditions of borrowing can be changed by law, and we think that this article will create confusion, because this Budget and Financial Management law is not a Decree-Law, which under other laws, but in the category of an organic law under the RDTL Constitution. This article also says that the state can give loans; we suggest that this Law must explain who will borrow from the state. How, and with what conditions? What risks and consequences is the state taking on? Who does this loan serve – private or common (national) interests? We also suggest that the Parliament can eliminate this article.

Article 29 (Special Funds). This article is to legalize Government initiatives to create a separate fund, as the court decided was unconstitutional last year. This article also does not follow RDTL Constitution article 145 (2) which states “The Budget law shall provide, based on efficiency and effectiveness, a breakdown of the revenues and expenditures of the State, as well as preclude the existence of secret appropriations and funds.” Part (9) of this article will give the opportunity for state expenditures to grow larger, because it gives space for each Ministry to create a Special Fund. We think that funds like this don't benefit the people, when the capacity for budget execution is low, and that executing the budget does not indicate that programs have been carried out. This article also changes UNTAET Regulation UNTAET 2001/13, Article 21 (Special Budget Funds) which was established prior to the RDTL Constitution. We also suggest including a calculation or estimate of the amount of special funds in each annual budget. We recommend and suggest to National Parliament to eliminate this article, as it contradicts Constitution Article 145(2).

Article 35 (Budget alterations in services without administrative and financial autonomy). For this article, we suggest that there should not be transfers from one ministry to another, and that if a transfer exceeds a certain amount, for example less than $100,000 can be approved by the Council of Ministers, and above $100,000 must be approved by the National Parliament. This calculation can justify the capacity of each ministry to execute its budget transparently, accountability, and according to development plans already approved by the government, and reduce unnecessary state expenditures. In part 4 of this article, we suggest to clearly define the words “services” and “chapter” and use the words “Ministry” and “Department” to avoid legal confusion and future interpretation.

This joint submission is from: