Subversion of the rule of law in East Timor continues 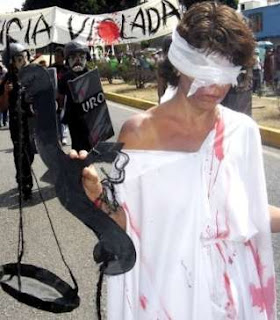 ETLJB 13 September 2009 SYDNEY – The failure of East Timorese leaders to understand the rule of law, the separation of powers and constitutional governance bodes great ill for the legal system. In another devastating attack on the rule of law last month, the East Timorese executive authorities illegally released from pre-trial detention an Indonesian citizen who stands accused of crimes against humanity.

Maternus Bere, of East Timorese origin but of Indonesian citizenship, was one of the leaders of the pro-Indonesian militia that slaughtered up to 200 people, including three priests, in the notorious Suai massacre, which occurred a decade ago on 6 September 1999 as the country descended into a horrifying tragedy of violence and destruction that left 1500 dead and the entire nation in ashes.

Bere was indicted by the United Nations' serious crimes unit for crimes against humanity. He was also indicted for assisting in the rape and abduction of one Juliana ‘Alola’ dos Santos.

East Timor’s Justice Minister, Mrs Lucia Lobato, herself battling allegations of corruption, publicy described the decision as a political one. "As we all know, Martenus Bere has been given to Indonesia and we ask Indonesia to process him according to their court and justice system," Lobato told reporters after a church ceremony to mark the 10th anniversary of the massacre in Suai city in southern East Timor."It's the decision of the state and everyone has to obey the decision, although we realise that people sometimes might not agree or accept," she said.

But the Chief Justice, Claudio Ximenes, in an extraordinary intervention, has issued a public warning about the consequences of violations of the law of East Timor by the executive and has ordered an investigation; implying that criminal charges could be laid against those in the AMP government of Xanana Gusmao who participated in the decision.

Claudio Ximenes, in his statement said, "those in authority who are not judges have no power to order free someone from the prison who has been ordered to be jailed by a judge."

Acording to the East Timor Penal Code article 245, section 1, who ever with illegal action frees from prison those who according to the law have lost their freedom or those who help a person to escape are liable to prison terms of between 2 - 6 years imprisonment.".

East Timor Prime Minister Xanana Gusmao after his meeting with President Jose Ramos Horta in the Presidential Palace last Thursday responded, "I am ready because I did release him." In a challenge to the judiciary, Gusmao is reported to have said, "I know where Becora prison is so as soon as a court sentences me, I will go there my self."

National Unity Party leader Fernanda Borges critcised the decision to release Bere. “This act of intervention in the Timorese judicial system violates the Timorese constitution, the Timorese criminal procedure code and represents a crime under the new Timorese penal code.”

“Our government is willing to circumvent Timorese law and perpetrate a grave injustice upon the victims of the 1999 violence throughout Cova Lima in order to pander to our neighbour Indonesia’s political interests. The Timorese people fought for independence in order that they can live in a country where the law is applied transparently and equally to all, regardless of political opinion. The actions of the government represent a great step backwards in terms of the Timorese struggle to establish an independent nation governed by the rule of law, said Mrs Borges in a statement released on 7 September 2009.

“Maternus Bere was released from jail upon the verbal order of the Minister for Justice, at the urging of the Prime Minister. This is against Timorese criminal law. A person can only be released from pre-trial detention by a judge and only in certain circumstances.

Article 69 of the Constitution of Timor-Leste provides that the organs of sovereignty will respect the separation of powers. In practice, this means that neither the government, parliament nor the president can interfere in the administration of justice by the courts. Article 7 and 8 of the Timorese criminal procedure code clearly state that the courts are subject only to the rule of law and that public authorities, including the government, have an obligation to cooperate with the courts in the administration of criminal justice. In forcing the release of Maternus Bere from custody, the government is not complying with this obligation but is instead interfering in the administration of justice. Under the new Timorese Penal Code, article 245 (1) it is a crime for any person “who, by unlawful means, releases or, by any means, aids in the escape of a person, lawfully deprived of liberty” and “is punishable with 2 to 6 years imprisonment”. This is effectively what the Prime Minister and Minister for Justice has done by facilitating Bere’s release.

Section 160 of the Constitution also stipulates that international crimes such as; crimes against humanity, genocide and war crimes, which occurred between 25th of April 1974 and the 31st of December 1999, are liable to criminal proceedings in a national or international court. By freeing Marternus Bere, the Timorese government has prevented a suspected perpetrator of crimes against humanity from ever being brought to justice,” the statement said.

Image: Lady Justice, still standing, but bloodied and violated by the illegal hand of the executive in East Timor.
at Sunday, September 13, 2009