Timor-Leste Non-Government Organisation Forum: Against intervention in the judicial system 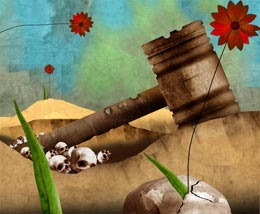 On 30 August 2009, Prime Minister Xanana Gusmão freed Maternus Bere, formerly of the Laksanakan Sapu Rata Militia (Clean Sweep Militia also known as LAKSAUR Militia). Maternus Bere is the former commander of the Laksaur militia, which on 6 September 1999 was directly involved in the Suai Church Massacre when many people were killed, including three priests. In 2003, the United Nations Serious Crimes Special Panel released a strong indictment against Maternus Bere and his fellow militia (Case Number 09/CG/TDD/2003).

On 30 August 2009, the Indonesia Foreign Minister Hasan Wirahuda had received a special invitation to attend the Tenth Anniversary Celebration of the Referendum in Timor-Leste. According to information we have gathered, Hasan Wirahuda pressured the Timor-Leste Government, saying that he would not attend the August 30 Celebration if Maternus Bere was not immediately freed. In connection with this political pressure, the President of the Republic asked the Prime Minister to immediately release Maternus Bere.

The Prime Minister then asked the Justice Minister to release Maternus Bere from Becora Prison and hand him over to the Indonesian Ambassador in Timor-Leste. The release of Maternus Bere did not come from a court decision.

On 6 September a group of human rights activists together with victim’s families from the Suai Massacre went to light candles in a peaceful protest in front of the Indonesian Embassy.

The NGO Forum and its members have identified a number of institutions that prejudice the spirit of the Constitution in relation to the principles of separation of power and justice, and threaten the sovereignty of the State.

1. The NGO Forum and its members strongly lament the Government’s politics of direct invention in the independence of the judiciary by releasing former militia Maternus Bere without a court order. We request all the organs of the state respect the principle of separation of powers between each of the state organs.

2. The NGO Forum and its members are saddened by the weakness of the State’s institutions, especially the President of the Republic and the government that continues to bow down to international intervention, particularly from Indonesia to release the perpetrator of serious crimes. We request the Government, President, Court and National Parliament to strengthen its commitment to promote justice in Timor-Leste.

4. We ask the President of the Republic to promote the principle of the separation of power to lessen intervention in the judicial organ, and we ask the President to comply with his oath as laid out in Article 77 of the RDTL Constitution.

5. We request the court issue a warrant for Maternus Bere based on the accusation of the Dili District Court Special Panel for Serious Crimes (no. 09/CG/TDD/2003).

9. Based on Article 160 of the RDTL Constitution, Serious Crimes from 1974 to 1999 must be tried in Court or by an International Tribunal, not processed by cheap political decisions. We request the State to respect the principle of Article 160 of the Constitution. In addition, we urge the National Parliament and all organs of the State to quickly and immediately debate the CAVR Report Chega and implement all its recommendations.
-----
East Timor Law Journal - Towards the rule of law in Timor-Leste!
at Wednesday, September 16, 2009