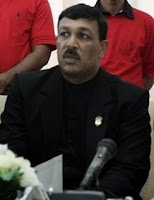 118 captured and 7 imprisoned for criminal activity in Bobonaro and Kovalima Diario Nacional, February 22, 2010 language source: Tetun - The National Police Commissioner, Longuinhos Monteiro, has said that one
hundred and eighteen people have been captured and seven people were imprisoned in operations connected with “ninja” gang activities in the districts of Kovalima and Bobonaro.

“There were seven men there wearing ninja clothing and they have now been detained awaiting trial, however the other one-hundred and eighteen residents have simply been participating in police procedures,” he said,
during a press briefing in Kovalima.

Commissioner Monteiro also added that the number of those who voluntarily handed themselves in has now reached a total number of  four hundred and fourty-eight people, including sixty-seven people from
Fohorem Sub-district.

Commissioner Monteiro also said that one of the seven people, “Karau Timor”, was captured in Ainaru on Thursday and was taken to the Suai court.

From the hearing allegations were made that “Karau Timor” had been involved in horrible crimes including the decapitation of a girl, as well as an alleged sexual assault against his own niece.

Commissioner Monteiro says that the police operations to stop criminal activities in the Bobonaro and Kovalima will continue until at least August 2010 “in order to restore peace and security within the troubled districts”.