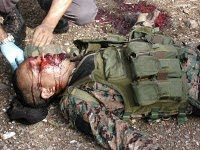 Suara Timor Lorosa’e, February 10, 2010 language source: Tetun The defense team for the ex-rebel leader Gastao Salsinha has called for the court to re-examine the bullets used to shoot his former accomplices, Alfredo Reinado and Leopoldinho Mendonca, at the resident of President Jose Ramos Horta.

The legal advisers for Salsinha called for the court to re-examine the bullet, after it was found earlier this week that the bullet that hit President Horta was a different type to that used to shoot Reinado and Mendonça.

Meanwhile, the Australian Federal Police Investigation and Forensic leader, Eric David, re-affirmed his team’s conclusion that the bullet used to shoot the president, was different to that used to shoot Reinado and Mendonca.
at Saturday, February 13, 2010