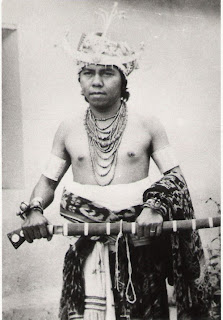 February 1st, 2010 by The Lost Boy When I first heard that there was a band of "ninjas" terrorizing folks in Timor-Leste, I have to admit I chuckled a little. But laughs aside, there is something odd going on. Obviously we're not talking about real ninjas, but just guys with masks who have been dubbed ninjas by the media.

The first I saw of this was a little more than a week ago. Diario Nacional reported that Operational Police Commander Mateus Fernandes had yet to receive any complaints from residents in Bobonaro and Covalima, where stories were emanating that ninjas were threatening to kill the locals.

However, Fernandes did say he had received a report on the ninjas from the police commanders of Bobonaro and Covalima and that those commanders would take the "necessary action" to deal with the troublemakers.

That same day, the Timor Post quoted Fernandes as saying that the police had thwarted the operations of the aforementioned ninjas.

About this time, parliament called for the Timorese national police force (PNTL) and the armed forces (F-FDTL) to go on a manhunt and find the ninjas. Given how sketchy the details were, this seemed odd.

Then, Aitahan Matak from resistance organization CPD-RDTL came out and denied any involvement in the ninja saga. Clear so far?

The police chief went so far as to say that any ninjas foolish enough to take on the L-man and his boys would end up deep-sixed at Santa Cruz Cemetery. So that's the country's top policeman completely ignoring any rule of law and announcing he will kill wrongdoers, rather than do anything as offbeat as, I don't know, arresting them?

There is speculation that this is all a ploy to put armed cops in the districts in the run-up to municipal elections. Longuinhos and Xanana are buds, after all. Would the head of the ruling coalition go this far to secure a favourable result? I have no idea, but he did let an indicted murderer
at Monday, February 08, 2010