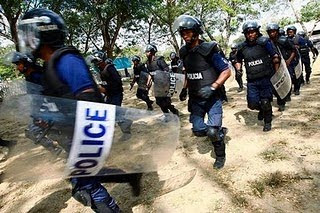 FRETILIN.Media Flash: 07:59 am, Dili, 17 February 2010 FRETILIN bancada (parliamentary group) endorses the recommendations and observations made in the HAK Association Press Statement below.

FRETILIN bancada is especially concerned with the misinformation that has been disseminated in the media, which has added to a public hysteria regarding the existence of "ninjas". As the release states: "the people do indeed feel panicked by the rumors but that the communities themselves have not yet seen who or what “Ninja” are. Local authorities in the two districts also informed the monitoring team that they have not received any complaints from the community or victims about “Ninja” behavior."

This observation is particularly concerning given the widely published public/media statements by the PNTL commander that state as a fact the existence of "ninjas" attributing criminal actions to these "ninjas" and in one instance that some had escaped to Dili already. Some government MPs have been referring to the "ninjas" as existing "almost everywhere in the country at the moment."

FRETILIN bancada is concerned with what has clearly been a "Fahrenheit 9/11" style campaign to ratchet up a public sentiment of "instability" that justifies excessive law enforcement responses.

FRETILIN bancada will follow up on the breaches of the law, constitution and human rights reported in the statement, especially as HAK states:

"HAK Association has identified human rights violations and behavior in violation of the law by individual police officers involved in the operation in the two districts, including ill treatment such as ramming with riffle butts, kicking, beating with batons, cutting people’s hair with a knife, threatening their life, and speaking sharply to people when detaining someone and in detention when they do not reveal who is a “Ninja”."

We agree with an appropriate and proportionate policing response to deal with criminal conduct, and to reinstall a feeling of safety and stability in the affected communities, but totally reject the military style, commando-like operation, which HAK rightfully says was a:

"PNTL commando operation (that) does not respect the constitution of the Democratic Republic of Timor-Leste (RDTL) Article 9 and Law No 3/2008 (State of Siege and Emergency), because an operation with large numbers in an extraordinary situation requires authorization from an organ competent to declare a Situation of Exceptional Circumstances. The action of the police is a precedent that is contrary to strengthening the rule of law in a democratic state."

Further, in depth inquiry by the national parliament will be necessary urgently to bring more informed comment and perspective into this issue by all concerned.