East Timor's "attempted assassination" trial - Who conspired to murder who? 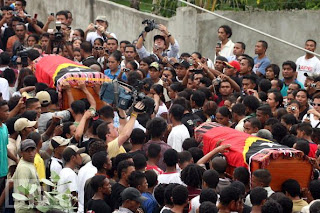 President Horta will show his scars to the public Televizaun Timor Leste & Diário Nacional, February 20, 2010 language source: Tetun - The President Jose Ramos Horta said that he would show his scars to the Timorese public sometime in the future as there are some who disbelieve that he was shot by rebel soldiers led by Alfredo Reinado on February 11, 2008.

“I want to see those who are like Saint Thomas by showing them my scars and I believe that like Thomas they will be ashamed but I cannot act as if I were in a zoological garden to take off my clothes in public,” Horta said.

President Horta said that many witnesses including the Australian surgeons that worked on him after the failed assassination attempt in 2008, and the former Timorese Health Minister Doctor Rui de Araujo, can
verify that he was shot and still has scars.

But the President has said that he could show the scars privately to members of the court case if necessary.

Former Rebel Gastao Salsinha denies allegations made by public prosecution Radio Timor Leste, February 20, 2010 language source: Tetun - The ex-rebel leader, Gastao Salsinha, has denied the allegation made by the Public Prosecution that he, and the other rebel followers, were involved in the assault and attempted assassination of the President Jose Ramos Horta and Prime Minister Xanana Gusmao on February 11th 2008.

Mr. Salsinha made the comment as his trial taking place at the Dili District Court comes to a close.

He repeated his statement that he, and the other rebels, went to the president and prime ministers houses with the intention to hold discussions with the leaders and said that none of the rebels wanted to attempt an assassination.

Mr. Salsinha stressed that the Public Prosecution is wrong in accusing him of intending to kill the leaders and also said that noone was actually hurt, either the security guards or rebels, in the alleged assassination attempt on Prime Minister Gusmao.

Mr. Caetano said that he had no intention of shooting President Horta, because he considered the president as a father.

Mr. Caetano revealed that he was told by his commander Alfredo Reinado to come to President Jose Ramos Horta’s house to hold discussions with him, but not to attack the president.

“We went to the President Horta’s resident to hold dialogue with him as we were instructed buy our commander Reinado”, Mr. Caetano said.

Alleged assassination mastermind Angelita Pires claims her innocence Radio Timor Leste, February 20, 2010 language source: Tetun - The accused, Angelita Pires, has claimed that she, along with the twenty-seven other former rebels alleged to involve in the attempted assassination of 2008, are innocent.

Mrs. Pires denies the allegations, made by the prosecution, that she raised funds to support the ex-rebel leader, Alfredo Reinado and says Reinado’s group was funded by the Timorese Government at that time.

“The allegations made by the Public Prosecution are a falsehood because there is no evidence; therefore the courts have to reveal the truth, based on the facts presented in this case,” Mrs. Pires said.

She also denied claims Reinado had sought any support from Australia, saying that he was well funded by the Timorese Government.

She explained that her relationship with Reinado, was that she was his girlfriend, not an organizer of any alleged attempts to assassinate the President.

President Horta should show his scar to the court Suara Timor Lorosa’e, February 22, 2010 language source: Tetun - The lawyer for the ex-rebel leader, Gastao Salsinha, Jose Pedro Camoes, has said that he will not believe that President Jose Ramos Horta was really shot by the rebel on February 11th 2008, if the president not yet to show his scars to the court.

Mr. Camoes made the comment following the Public Prosecution and medical staffs are not yet to present a formal report on the President Horta and the Timorese Defense Force (F-FDTL) officer, Celestino Gama, to the court.

Mr. Camoes added that the lawyers are not believe that the president was really shot by the former rebel leader, Alfredo Reinado’s followers.

“We do not believe that Mr. President Horta was really shot by Reinado’s followers as he has not showed his scar yet,” Mr. Camoes said.

During an official ceremony held for the deceased, PNTL Commissioner Longinhos Monteiro said that the death of Mr. Santos was a big loss for the PNTL.

Also present during the ceremony was the Prime Minister, who is also the Minister of Defense and Security.

Since 1986, Mr. Santos was a member of Mobile Brigade Unit of Indonesian Police and was a security guard for the last two Indonesian governors in Timor-Leste afterwards.

He became a personal body guard and driver for Mr. Xanana, then president of the CNRT, based on the recommendation from Mr. Mario Carrascalao in 2000.

In 2002 he become a PNTL member and from there was recruited as personal bodyguard of Xanana.

He was born in Estadu village of Ermera in 1966 and is now survived by his wife Maria Lourdes Pina with their five children.

20 years sought for attackers Diario Nacional, February 22, 2010, language source: Tetun - The Timorese public prosecution office has sought prison sentence ranging from two to 20 years for those 28 people involved in the February 11th attack on the President of the Republic and the Prime
Minister.

The charges against the attackers were decided during a trial held by Dili District Court last Thursday (16/2).

Mr. Felizmino Cardoso said that there were convincing fact and evidence that the attackers held automatic guns illegally and that they had committed crimes against the state, according to the Indonesian penal code nos. 53, 338 and 104.

The lawyer of rebel group Jose Pedro Camoes said that there was no strong and sufficient evidence against the attackers and therefore he asked the court to immediately release them.

Mr. Camoes said that the rebel group led by the late Alfredo Reinado came down to Horta’s residence based on the invitation of the president sent through a short-message service (SMS).

He also stressed that there was no intention from the rebel group to kill the President and the Prime Minister.