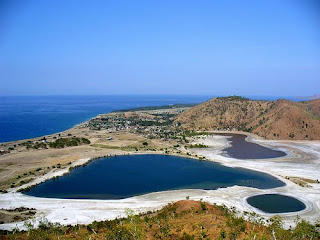 TEMPO SEMANAL http://temposemanaltimor.blogspot.com/2010/02/pelican-paradise-is-building-on-remains.html - At the building site of a five star hotel by Pelican Paradise in Tasi Tolu western Dili allocated to the company by the Government of Timor-Leste new concerns are being raised.  The company is a Malaysian consortium.

While construction work has commenced the company has found some suspected human remains on the building site.  Yesterday there were several foreign forensic experts on the site.

According to Tempo Semanal sources yesterday on the spot said that, "the forensic expert found more then one human remains." Another source close to the Ministry of Tourism Commerce and Industry (MTCI) told Tempo Semanal ,"so far we may find the remains of 9 people here"

Some Timorese who lost their relatives together several with veterans and ex political prisoners groups during the Indonesian occupation were present at the building site as well. These human remains are suspected to be Timorese who were killed by ABRI soldiers during the 24 years occupation. In those dark years more than one third of Timorese died from starvation, mass killings disappearances and torture.
--
Posted By TEMPO SEMANAL to TEMPO SEMANAL on 2/24/2010 09:00:00 PM

Image added by ETLJB: Tasi Tolu (The Three Seas/Lakes) on the western outskirts of Dili. Human remains from the Indonesian genocide have been discovered at the site of the contsruction of a five-star hotel development.
at Friday, February 26, 2010