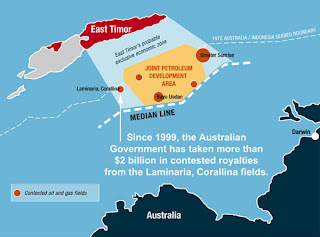 17/02/2010 MaucauHub - Dili, East Timor, 17 Feb – The value of East Timor’s Oil Fund at the end of December totalled US$5.377 billion, or over US$75 million more than in September, according to the most recent quarterly report.

The value compares with US$5.301 billion at the end of the quarter ended in September.

The report from the East Timor Banking and Payments Authority (ABP) shows that the rise in revenues from royalties and taxes made up for the drop in market prices.

Gross revenues in the last quarter totalled US$394.03 million, including US$233.49 million in royalties paid to the National Oil Authority, US$155.30 million in taxes paid to the Fund and US$5.24 million in other revenues.

Revenue from the Fund’s investments was US$5.63 million, of which the coupons and interest component totalled US$43.64 million and the change in market value of the securities was negative by US$49.3 million.

This resulted in a quarterly return for the securities portfolio of mines 0.10 percent, in line with the benchmark for the same period.

The Oil Fund law specifies that the ABP, as the future central bank of East Timor, is the agent responsible for the operational management of the Fund, whilst the Finance Ministry is responsible for defining the overall investment strategy of the Fund. (macauhub)
at Sunday, February 21, 2010