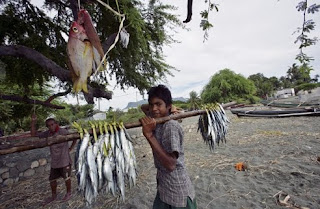 Laws on Municipal Elections still to be heard in parliament Diario Nacional 12 February 2010 The municipal assembly elections due to be held this year could be delayed due to laws regarding the elections not being passed through parliament.

Maria Paixao calls for Independent Courts on Salsinha Case Diario Nacional 12 February 2010 Deputy Parliamentary President Maria Paixão has said that justice process in Timor-Leste should uncover the truth about the attempts to assassinate President Jose Ramos Horta, so that the public can have more trust in the country’s judicial system.

Deputy PM Carrascalao presents new corruption plan at council of ministries Timor Post 12 February 2010 The Deputy Prime Minister for Management and Public Administration, Mario Carrascalao, has said that he has presented a new strategic plan to combat corruption in the country to the Council of Ministries, but that his ideas had mixed results at the meeting.

Ninja Gangs burn down houses, despite police intervention Timor Post 12 February 2010 Zumalai residents have voice their surprise that ninja gangs continue to attack their area, despite the national police and army being sent in late last week.

Parliamentary Committee A and Gender Equality Secretary discuss possible changes to domestic violence laws Timor Post 12 February 2010 The Parliamentary Committee A for Law, Constitution, and Local Power President, Fernanda Borges, has said that there may be some possible changes to laws on gender, particularly regarding domestic violence, following discussions with the State Secretary for Promotion and Gender Equality Idelta Maria Rodriguez.

Courts questions President Horta’s position to testify Radio Televisaun Timor Leste 12 February 2010 The Courts has questioned abut President Jose Ramos Horta’s position, because he has yet to respond to the written questions made by the court in relation to the trial for the attempted assassination on February 11, 2008.

Political party representative participate in training Radio Televisaun Timor Leste 12 February 2010 The United Nations development Program (UNDP) Coordinator for Training, Bernardo Cardoso said the boards and the political party members should have knowledge about laws before the implementation of system of municipality.
at Monday, February 15, 2010