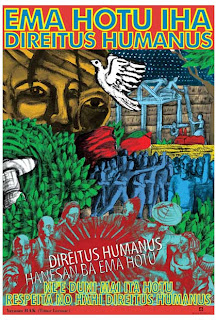 HAK Association Diretu ba ema hotu no Ema hotu iha diretu (Every body has rights and rights are for all) Press Statement “Human Rights Situation in Covalima and Bobonaro” - As an organization that works for human rights, HAK Association is concerned with the situation in Bobonaro and Covalima Districts, especially the population’s right to security. HAK considers the reaction of the National Police of Timor-Leste (PNTL) to the “Ninja” group as an obligation of the competent organs of the state to comply with their human rights commitments. To assure that the police response actually is in accordance with the law and human rights principles, HAK sent a monitoring team to observe the human rights situation in the two districts from 31 January to 4 February 2010.

1. Results of HAK Observations of Rumors of “Ninja” in Bobonaro and Covalima Districts

HAK’s observation revealed, confirmed by community authorities, local government, victims, suspects and some community members in places where “Ninja” terror is said to exist, that the people do indeed feel panicked by the rumors but that the communities themselves have not yet seen who or what “Ninja” are. Local authorities in the two districts also informed the monitoring team that they have not received any complaints from the community or victims about “Ninja” behavior.

The incidents, one child’s death and the death of one young woman, were individual crimes and there is no relationship between them or connection from one location to another. There is also no evidence of organized crime or large criminal groups. The rumors about the “Ninja” group lead people to imagine an organized criminal group, but this is contrary to the actual situation. The groups CPD-RDTL (Popular Council for the Defense of the Democratic Republic of Timor-Leste) and Bua-Malus (Betel Nut) do exist, and individuals from these groups have engaged in criminal behavior motivated by personal hatred and desire for revenge that is falsely attributed to the groups.

The police operation, begun on 22 January 2010 has failed to identify perpetrators involved in a “Ninja” group that is terrorizing communities in the two districts. Through its operation, the police have arrested 20 members of CPD-RDTL and Bua-Malus who they suspect as “Ninja,” but when brought to court the judge released 18 of them based on proof of identity and residence (TIR) due to insufficient evidence to uphold the charges of the police against the suspects. Two of the detained were placed in preventative detention due to a strong indication that they were involved in the death of the young woman in the village of Atus in Bobonaro District.

HAK Association has identified human rights violations and behavior in violation of the law by individual police officers involved in the operation in the two districts, including ill treatment such as ramming with riffle butts, kicking, beating with batons, cutting people’s hair with a knife, threatening their life, and speaking sharply to people when detaining someone and in detention when they do not reveal who is a “Ninja”.

Based on our observations, HAK Association is concerned that the PNTL commando operation does not respect the constitution of the Democratic Republic of Timor-Leste (RDTL) Article 9 and Law No 3/2008 (State of Siege and Emergency), because an operation with large numbers in an extraordinary situation requires authorization from an organ competent to declare a Situation of Exceptional Circumstances. The action of the police is a precedent that is contrary to strengthening the rule of law in a democratic state.

Additionally, according to HAK’s observations in the two districts, the police operation demonstrates disharmony and inconsistency with the policy outlined by the IV Constitutional Government regarding reform of the PNTL, due to its militaristic character rather than an approach characteristic of community policing. This situation is due to the lack of optimal government attention to the development of the nature of the PNTL as a community police force.

During the operation individual police have violated human rights, carried out actions contrary to the law or abused their power such as arresting people without a court order and persecuting members of an organization, in addition to the violations cited above. This behavior by the police violates the presumption of innocence consecrated in article 34 of the RDTL Constitution, because according to the law only the courts have the competency to decide if someone is guilty.

HAK also observed that local PNTL officers did not respond quickly or act immediately to investigate or arrest the suspects in the homicide and death that occurred in the two districts that finally evolved into “ninja” rumors. Incidents such as these require immediate and urgent remedies by the State of Timor-Leste to prevent additional suffering and for people to believe that PNTL can guarantee their right to security and justice.

To prevent a worsening human rights situation in Bobonaro and Covalima Districts and to prevent the population from suffering more, as well as to prevent similar experiences in the future, HAK recommends:

1. The situation in the two districts does not require a large PNTL commando operation because it does not meet the criteria for an Exceptional Situation. Consequently, HAK suggests the competent organs in the security sector quickly examine the policy for the “ninja” operation currently underway in Bobonaro and Covalima Districts.
2. The responsible organs quickly revise the Plan for PNTL Reform in order to assure harmony and consistency between the plan and its implementation.
3. National Parliament uses its competency of legislative supervision according to Article 92 of the RDTL Constitution to supervise the executive organs, especially how the PNTL enforces the law.
4. To publicly guarantee accountability of the PNTL, the competent organs (PNTL Justice Unit and Prosecutor) must assure individual members of the PNTL who behaved contrary to the law and violated human rights are held responsible (administratively and criminally).
5. Future extraordinary operations by the security and defense forces must be coordinated with the Prosecutor’s Office so that orientation of the police adheres to the law, and thus avoids violating human rights.

That is the extent of HAK’s observations, concerns and suggestions about the situation resulting from the “special” PNTL operation in Bobonaro and Covalima Districts. We await appropriate action to assure that all Timorese citizens can be proud of and cooperate with the PNTL and our police officers.

For More Information or a Copy of the Complete Report Contact: