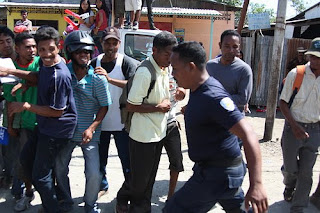 Timor Post, February 9, 2010 language source: Tetun - The President of the Parliamentary Committee B for Defence andSsecurity, Duari Nunes, has called on the government to make an assessment of the work of the national police.

Mr. Nunes said that having an assessment could be helpful to the police for improving their abilities.

“I think the Government needs to make an assessment of the National Police’s performance, so that we can better know their capability,” Nunes said.

Mr. Nunes made the comments yesterday in relation to the completion of the UN Police Mission that is due to take place in December this year.

“The deadline set for the UN Police Mission will end in December this year. The National Police need to be prepared,” Nunes said.

Image added by ETLJB (from http://whatismatt.com/crowd-control/): An East Timorese policeman behaving aggressively towards spectators at the Tour de Timor, August 2009
at Thursday, February 11, 2010