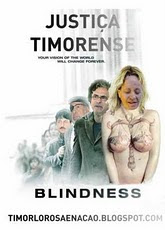 ETLJB Editorial Note SYDNEY 17 February 2010 : Recent shootings and bashings by the officers of the East Timor National Police forces, as well as historical human rights abuses perpetrated by the police since independence, reflect not only the incompetency and impotence of the United Nations Integrated Mission in East Timor and donor countries in the police development training programs, including Australia and Portugal, but also the national organs of the East Timorese state; namely, the Government, the Parliament and institutions of the justice system.

A disciplined and professional police force is a prerequisite for the protection of the legal rights of East Timorese citizens. Many millions of dollars have been spent on police training and development over the 10 years since the succession from Indonesia's illegal and bloody occupation.

And yet, there is an ever-growing body of frightening and graphic evidence that shows that the police do not understand what their social role is. Nor have the police been instructed on what that is or what protections the law confers on citizens in the policing system and so police officers continue to commit violations of the fundamental rights of individuals. And this on top of the grinding poverty and deprivation that most of the East Timorese population experiences every day.

Donor country taxpayers may well ask whether the quite considerable contributions from their people to the development of the East Timor police force are being well spent or whether it would be better if more attention was directed to the strengthening civil society, particularly those civil society organisations that are active in the justice sector in East Timor.

The peak legal system monitoring program in East Timor, the Judicial System Monitoring Program, for example, can not even afford to have its critical reports translated into English. The investigations, monitoring, analyses and reporting conducted by JSMP are central to gaining insights into when and where the justice system is not functioning in accordance with the law. Such insight is a crucial vector in foreign aid programs in the justice sector and yet accessibility of JSMP's work is limited and remains hidden.
-----
National Police register 87 disciplinary cases in one month Radio Televisaun Timor Leste 15 February 2010 The Timorese National Police registered eighty-seven disciplinary cases against their own officers in one month (January), according to information from the department.

United Nations Deputy calls for National police to gain public confidence Radio Televisaun Timor Leste 15 February 2010 The Leader for the United Nations Integrated Mission in Timor-Leste, Takahisa Kawakami, has called for the Timorese National Police to continue to improve their relations with the public to gain their trust.

Timorese ombudsman to trains National Police in Oecuse district Diario Nacional 15 February 2010 The Director for Human Right at the Timorese Judicial System and Justice Ombudsmen, Valerio Magno Ximenes, has confirmed that his department will provide training to the national police in the Oecuse District today on the process of detainment and how to prevent human right violations.

Major re-organisation of the National Police not likely: Former NGO Director Timor Post 15 February 2010 The Former Director for the Non-Government Organization Yayasan Hak, Jose Luis de Oliveira, has denied that the concept of a major change to the security sector of the country, particularly the Timorese National Police institution, is being seriously discussed by authorities.

Police Commander Calls for UN Police to expand his department’s role Timor Newsline 15 February 2010 The Timorese National Police Commander, Commissary Longuinhos Monteiro, has called for the United Nations Police to expand the national police’s role to residential areas as the country moves towards self-dependence. [The Delta Nova case is the case where an East Timorese policeman is suspected of shooting and killing a young Timorese artist.]
at Wednesday, February 17, 2010