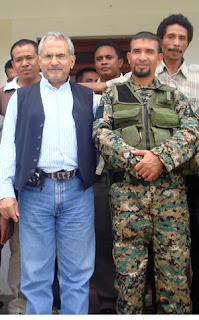 Dili - The President of the Republic Dr. Jose Ramos Horta acknowledged that shortly before the events of February 11, 2008, he sent out a Short Message Service (SMS) to the commander of the rebel group, Alfredo Alves Reinado, requesting to have a dialogue.

However, PR Horta said that in the SMS he had not yet determined the right place and day to hold this dialogue.

The Head of State is ready to clarify this issue to court.

"If, at that moment I said to Alfredo Reinado that I wanted to talk to him and I said I had even sent a message to him, and wanted to speak to him and I told him to just wait, and then I would say the time and the place." the PR recently told the reporters.

Horta also said he was surprised/scared when Alfredo and his group went to his residence on 11 February.

"He came with the objective to scare everyone and I would never hold a meeting in my house at six o'clock in the morning," said Horta.

He said he already began to prepare the answers to questions that the court sent him in writing last year.

Horta said he was ready to continue to give his cooperation in the court case.

Image added by ETLJB: President Jose Ramos-Horta with Major Alfredo Reinado one month before Major Reinado was gunned down in the president's residential compound on 11 February 2008.
at Wednesday, February 03, 2010