Who founded Timor's death squad in 2006? 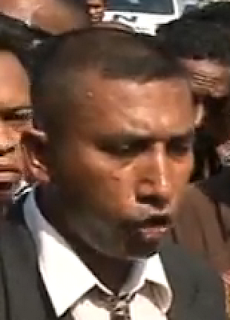 Now start again some speculation on the media and in some newspapers in East Timor that Rai Los was put on probation.

This action is to continue to make the” lie a truth”, in the Portuguese language. This moment, they are already afraid therefore they want repeating the scenarios of lie that created in 2006.

Let's return to the past, the day of the trial of Comrade Rogeiro Lobato, for so we can all understand and who is this secret group? So, no need to live with these rumours, propaganda and remaining slaves of these cheap speculations.

In full Court during the trial of Comrade Rogeiro Lobato, according to Rai Los, as witness the Rai Los said the judge."This secret group was Rai Los himself who created and did grow and Railos and its members chosen to each other, and that the Members have chosen Railos as Commander of this secret group "!

We suggest our friends to ask to the Rai Los where Matthew Arakat is? Why is that so far we have not found the faces of Matthew Arakat? Why and who did the Arakat flee to Kupang, and not wanting to return to East Timor to go to respond to Court? He is working in Aqua Mor Company , in Kupang, leaving a place as an entrepreneur in East Timor, and is now official or Manager for the company Aqua Mor in Kupang.

Why is speculating until now that this is a Fretilin secret group?
If it is anyway, as Commander of Fretilin secret group, why Rai los was campaign director of the candidate Dr. José Ramos Horta, director the campaign of Mr. Xanana Gusmão and of the CNRT in Liquiça during the campaign Presidential and legislative in 2007? And also in the crisis 2006 All my friends are silence, all friends are disloyal do not want to understand but only look for making up stories to denigrate the Fretilin’s image.
We ask our friends not to follow in the same invader’s policy, for a independent RDTL this policy of persecution and damage the image of Fretilin was only in time of the occupation, not continue to be prisoners Indonesian nostalgia.

Search also meets other facts that you have saved on archive. Rai Los received weapons on the 10th of May and on the 19th of May this year (2006) the Rai Los was under command of Xanana Gusmãoand also Railos and their men were hidden in Xanana house at Balibar.
That scenario is and who is the same? Open your eyes a little bit to see well, and after all you may understand what these facts show, so each one of us can take a right and logical conclusion in relation to this secret group.

The question is, if Rai Los is a master of a secret group of Fretilin, Why the Rai Los was elected as the campaign director for the candidate Dr. José Ramos Horta, campaign director of Mr. Xanana Gusmão and CNRT in Presidential and legislative elections in 2007? This can only happen in East Timor! Let's, each one of us, look for the answer to this small question above.