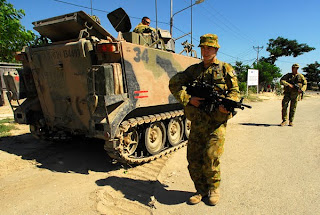 The Age Lindsay Murdoch, Darwin February 8, 2010 - THE Australian Defence Force has retracted a claim that it gave the family of an East Timorese woman, 65, who died after an army vehicle hit her, compensation forms and advice on how to fill them out.

Defence has also said it will not pay compensation in East Timor, including to the woman's family, for the actions of its 450 soldiers deployed there.

More than six weeks after Gracinda da Costa was struck on a Dili street, Australian soldiers serving in the International Stabilisation Force in East Timor still have not contacted her family to tell them what happened, express regret or advise them about compensation.

Mrs da Costa's son-in-law and family spokesman, Cornelio Baros, says the family should be compensated because of the hardship her death has caused family members, including her teenage daughters, who are now separated and living with different families.

Timorese families are traditionally compensated, even in a token way, by those involved in a death, no matter who is to blame.

On January 27, Defence told The Age that an ISF medical officer had provided Mrs da Costa's family with compensation forms and advice about how to complete them on December 18, the day she was admitted to hospital. But family members told The Age they had no knowledge of this.

Defence said it was ''inappropriate'' for the ISF to contact the da Costa family while an East Timorese police investigation into the death was under way.

But asked further questions by The Age, Defence said under the terms of the agreement in which Australian soldiers were deployed in East Timor in 2006, the East Timorese Government ''pays compensation to those citizens affected by ISF actions''.

The Age has previously reported that Australian soldiers were unaware for 13 days that Mrs da Costa had died from a head injury the same day she was admitted to hospital.

Defence said Mrs da Costa suffered a broken leg and lacerations. But Mr Baros said she had multiple injuries, and doctors could not save her after a three-hour operation.