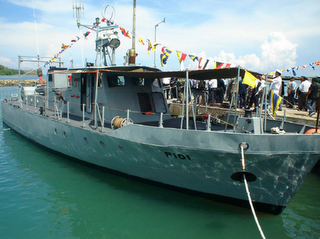 Tempo Semanal sources within the Government of Timor-Leste stated last night that the Council of Ministers will hold an extraordinary and emergency meeting today (Saturday 27 February 2010) to discuss the matter of the soon to arrive FALINTIL-FDTL patrol boats from China.

The Government of Timor-Leste signed a contract for two Shanghai class patrol boats from Poly Technology of the Poly Group in China.  Poly Group, which has close ties to the Chinese People's Liberation Army (PLA), is expected to deliver the patrol boats in the next 4-8 weeks.  However, port facilities are not ready and there is an urgent need to prepare the Hera port for their arrival.  Efforts are already underway to build a port facility for the patrol boats on the south coast of Timor-Leste.

Tempo Semanal sources have raised allegations that Ines Almeida (a dual Australian-Timorese national), formerly adviser to Minister of Finance Emilia Pires (paid for by the Worldbank) until mid 2009, has been aggressively lobbying on behalf of an Australian company to build port temporary facilities in Hera for the patrol boats. It is reported that the boats will be "modified versions of the Type-62 Shanghai-class patrol boat, which was designed in the 1960s: 43 meters long, displacing 175 tons and armed with two 30-mm cannons."

According to Tempo Semanal sources Ms. Almeida and agents of the Company she is lobbying on behalf of recently visited Hera port and requested data specifications on the port from F-FDTL officers.  This was refused and Ms. Almeida allegedly lodge a protest with the Government.

When contacted by Tempo Semanal on the morning of 27 February 2010 Ms. Almeida refused to comment, stating "I am no longer in the Government's employ, and am now a private citizen."

Ms. Almeida was caught in the centre of a Worldbank/Ministry of Finance "contracts" for friends scandal reported on by this newspaper in April 2009 - see here and here for more details

According to a Tempo Semanal sources within the defence institution there are plans to build a permanent port facility and so F-FDTL is reluctant to move ahead on a temporary facility option.

Additionally, an Indonesian company has also been recently conducting feasibility studies for a new multi-million dollar facility in Hera.

Prime Minister Xanana Gusmao's government has come under intense criticism from many foreigners in regards to the procurement of the two patrol boats, from the controversial Poly Technology group.