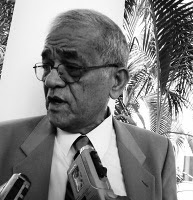 Deputy PM Carrascalao explained that the customs officials were checking the imported two to three times, in order to get more money from the importers.

Mr. Carrascalao said he was saddened by the officials actions and it is part of the reason that the prices of imported goods remain so high.

An importer from the SDV Company, Rafael Ribeiro, has called for the Government to respond to the recent case as soon as possible.

The Parliamentary Committee C for Finance and Anti-Corruption Commission, Manuel Tilman, has said that, because of the bribery, the price of goods within the country has been inflated causing hardship for the Timorese people.

“It is clear that the customs officers in the port asked the good importers for a large amount of money in order to unload their containers,” Tilman said.

Tilman added that these acts have caused the importers to increase prices of the goods to make a profit.

In response, the Minister for Planning and Finance, Emilia Pires has promised to take any necessary actions against her officers if they are found guilty.
-----
Government t yet to allocate funds for anti-corruption commission office Diario Nacional, February 10, 2010 language source: Tetun Deputy Prime Minister for Management and Public Administration, Mario Viegas Carrascalao has confirmed that there has been no money allocated in this year’s budget, to construct an office for the new anti-corruption commission (KAK).

Mr. Carrascalao has called for the newly elected anti-corruption chief, Aderito de Jesus, to make proposal to the Government about the case, so that they can resolve the issue soon.

“The KAK’s Commissary, Aderito de Jesus, has just been elected to the parliament weeks ago. He should make a proposal to the Government so that a new office can be constructed, which will help him fight corruption,” Mr. Carrascalao said.

Mr. Carrascalao said that the commission has the absolute power to investigate any corruption cases before handing them over to the courts.

“My role based on the law is to hold a routine investigation into my ministries and the result of the investigation will be handed over to the anti-corruption commission for a full investigation,” Mr. Carrascalao said.

-----
Anti-corruption commission yet to combat corruption Diario Nacional, February 11, 2010 language source: Tetun
The MP Cipriana Pereira from Fretilin party has said that the Anti-Corruption Commission will not be able to combat corruption this
year, because it should be making preparatory plans such as office preparations and recruiting its officers.

Mrs. Pereira said in combating corruption there needs to be proper conditions, such as an office for the Anti-Corruption’s chief to
function.

Mrs. Pereira said a chief for the commission has been elected and all parties should trust him in his work.

“More than 35 corruption cases registered between 2007-2009 and were recommended by the Justice and Human Rights Ombudsman and also by the Inspectorate General. The cases were from the Ministry of Justice and State Ministry of Administration,” Mr. Tilman said.

Mr. Tilman stressed that the backlog of criminal cases, more than 4000, were due to a lack of human resources and governmental issues.

Her statement comes in response to recent comments by the Deputy Prime Minister for Management and Administration, Mario Viegas Carrascalao, who said that there will not be enough money under the budget for the commission to have offices.

But, Mrs. Borges says the money issue is not a great problem, because there was still US$1million left over after last year’s budget.

Mrs. Borges stressed that preparing an office for the Anti-Corruption Commission should be a priority for the Government.

“I think one million dollars is enough for the commission as a new institution and we should support this funding so that the commission can work properly, provided they explain their programs,” Mrs. Borges said.

Meanwhile, Democratic Party MP Adriano do Nacimento to has said that the amount currently allocated for the commission is enough.

He said the commission should use the recent budget that has been approved by Parliament.

“The Anti-corruption commission is very important for Timor-Leste, all parties should pay attention to strengthening its work,” Mr. Nacimento
said.