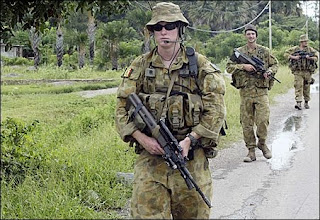 Letter to the Editor published in the Melbourne Age, 10 February 2010
http://www.theage.com.au/national/letters/tragedy-highlights-flaws-in-our-laws-20100209-npn1.html

Justice for military in Timor has flaws - I AM an Australian living in East Timor, working with a local non-government organisation, Lao Hamutuk. Regarding your story (''Army denies compensation claim in Dili death'', The Age, 8/2), Lao Hamutuk reported a similar incident in 2008 in which the Australian-led international stabilisation force did not follow up after a fatal accident.

Australians and New Zealanders serving in the ISF cannot be prosecuted in East Timor for crimes committed on or off duty. In these cases the ISF will carry out an internal investigation. If a soldier is found guilty, the ISF takes disciplinary action and recommends compensation - which the East Timor government, not the ISF, pays to victims.

This investigation is secret, so local people do not know if it considers all relevant evidence. That the ISF was unaware of Gracinda da Costa's death highlights investigative flaws.

The ISF does not explain to local people how to make and track complaints. It provides compensation request forms only for property damage, not personal injury. Many incidents are not reported and many complaints not followed up.

This lack of accountability undermines the work of many Australians, including current and ex-military, in supporting human rights in East Timor following 24 years of brutal military occupation.