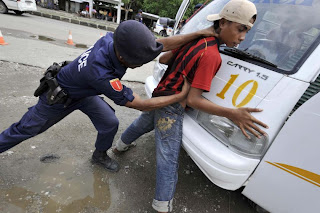 National Police powerless to help residents calling for assistance Timor Post 5 February 2010 The Timorese Operational Police Commander, Inspector Mateus Fernandes, has said that the police were saddened to hear of the desperation expressed by local residents, asking for help to stop violence in the capital Dili.

Local residents urge security post to be set up Radio Televisaun Timor Leste 5 February 2010 Local residents, Faulara suburb in Dili have urged the Timorese Government to set up security post, because the UN Police is incapable of responding to the recent disturbance which engaged the mart art clubs and the young gangs.

Commissary Monteiro hits back at parliamentary criticism Timor Post 4 February 2010 The Timorese Police Commander, Commissary Longuinhos Monteiro has called for the criticism to stop over his involvement in a recent police operation hunting ninja gangs in the Suai of Kovalima and Bobonaro districts.

Timorese Army to join with Timorese National Police to combat ninja gangs Timor Post 4 February 2010 The Timorese Police Commander, Commissary Longuinhos Monteiro has announced that he will enlist the assistance of the Timorese Defense Force (F-FDTL) in a joint operation to combat the rise of martial arts gangs in the Bobonaro and Kovalima districts.

Commissary Monteiro: “We should not depend on the UN Police to maintain security” Timor Post 4 February 2010 Timorese Police Commander, Commissary Longuinhos Monteiro has said that although the United Nations Police is still responsible for maintaining security in some districts, the country needs to begin looking towards its own national police force for security in the future.

President Horta: “PNTL should learn as much as possible from the UN Police, while they remain in Timor-Leste” Diario Nacional 1 February 2010 President Jose Ramos Horta has called for the Timorese National Police (PNTL) to work more effectively with the United Nations Police while the UN remains in East Timor.