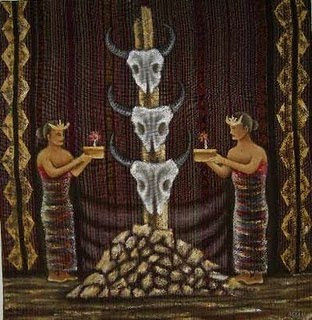 MP Riak Leman urges the Government to take necessary action against CPD-RDTL* leader Radio Televisaun Timor Leste 10 February 2010 - MP Riak Leman from the Social Democratic Party (PSD) has urged the Government to take a necessary against the resistance organization CPD-RDTL leader, Atonio Aitahan Matak, because some of his followers are suspected of being engaged in Ninja gangs.

*Conselho Popular pela Defesa da Republica Democratica de Timor Leste Popular, in English, the People's Council for the Defence of the Democratic Republic of East Timor is a radical dissident political group in East Timor that rejects the legitimacy of the 2002 Constitution. It has been accused of agitating for the overthrow of the post-independence political structure in East Timor and was the target of attacks by the United Nations Transitional Administration in East Timor (UNTAET) under the autocratic rule of UN-dictator Sergio Viera de Mello. It continues to be a thorn in the side of the government.

CPD-RDTL was established in 1999 to promote the view that independent East Timor should be based on the original Democratic Republic of East Timor (DRET/RDTL) which was proclaimed by FRETILIN on 28 November 1975 and which, it is claimed, East Timorese fought and died for. This means adopting 28 November 1975 as the date of independence, the DRET Constitution, DRET as East Timor’s official name, the DRET flag and anthem (Patria, Patria, Patria), FALINTIL as the national army, and installing surviving members of the DRET administration as the current leadership of East Timor.

CPD-RDTL thus stands outside and fundamentally opposed to the political transition process, the transitional mechanisms established by UNTAET and East Timorese organisations involved in the process, including FRETILIN and CNRT. This includes opposing upcoming elections for the Constituent Assembly. Relations with FRETILIN and CNRT have been marked by conflict and violence. CPD-RDTL believes FRETILIN has failed its historic mission. It disagrees with FRETILIN that its 1975 declaration of independence, which was unilateral and attracted little international support, is no longer valid. It opposes FRETILIN’s participation in CNRT and says CNRT should be dissolved, as resistance is no longer required and its façade of national unity is a fiction. For its part, CNRT considers CPD-RDTL’s appropriation of national symbols and other activities to be virtually treasonous.

CPD-RDTL states that it is not a political party but an umbrella group concerned to raise consciousness about East Timor’s past political history. It puts its supporters at several thousand and has links with dissident FALINTIL, including the Sagrada Familia led by Elle-Sette (L-7). Baucau and Dili are strongholds but support groups are also being established down to village level across East Timor increasing the likelihood of further conflict with CNRT and FRETILIN. The organisation rejects claims that it is anti-Church or that it promotes violence, though its flag-raising and other activities are often conducted in sensitive areas at sensitive times. It has also rejected claims that it was responsible for the recent alleged assassination attempt on Xanana Gusmao and argues that its opponents are seeking to discredit it by circulating misinformation. From East Timor Political Parties Profile