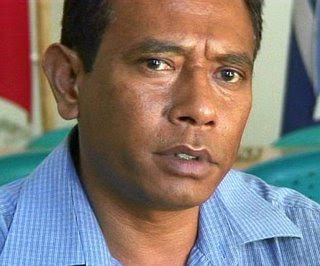 Recent allegations against resistance organization is unfair: Fretilin MPs Radio & Televizaun Timor-Leste February 16 2010 language source: Tetun - Fretilin Member of Parliament Arsenio Bano has said that the recent allegations against the resistance organisation CPD-RDTL (The Council for the Popular Defence of the Democratic Republic of East Timor) followers of killing two women in Simboli and Lur in Bobonaro district are unfair because the allegations are a falsehood.

Mr. Bano also accused the Democratic Party followers of destabilising the security situation in the country.

Another Fretilin Member of Parliament, Antonino Bianco, also said that the families of the victims have revealed that the Democratic Party is involved in the case.

In response, Lasama has called on the victims' families to collaborate with the police in processing this case legally.

“I will not tolerate anyone who has committed criminal acts and the police should capture those responsible and take them to the court,” Mr. Lasama said.

Radio & Televuzaun Timor-Leste reported on 16 February  2010 that the fathers of two women killed in Sibone and Lur in Bobonaro District said that the perpetrator of the killing their daughters are not CPD-RDTL resistance organisation members but that the murders were committed by members of Bua Malus and the followers of the Democratic Party.

Americo Sequira, the father of Ersilia de Jesus, said that said he is also a member of the CPD-RDTL so it is impossible for him to kill his own daughter. Mr. Sequira stressed that the man who killed his daughter has been arrested and is now being locked up in Becora Prison.

“The man is now Becora prison his name is Joao Pereira, he revealed that he is the one who ordered his followers to kill my daughter. He is a Bua Malus member and is also a follower of the PD party,” Mr. Sequira said.

Meanwhile, Manuel Moniz, the father of the second slain woman, Sabina, has said that until now he does not know yet the one who killed his daughter was and what the motive is.

CPD-RDTL has been a thorn in the side of the East Timorese state since the succession from Indonesia in 1999. CPD-RDTL is a dissident political movement in East Timor that rejects the legitimacy of the Timorese state and the Constitution. It demands a return to the 1975 constitution and has been accused of involvement in destabilising activities.

CPD-RDTL was also persecuted by the United Nations Transitional Administration in East Timor under the leadership of the late Sergio de Mello.