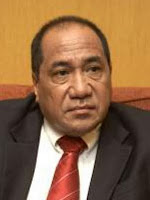 The Secretary of State for the Council of Ministers and Official Spokesperson for the Government of Timor-Leste Agio Pereira February 23, 2010 Dili, Timor-Leste Update on security issue

The Spokesperson of the Government of Timor-Leste, Secretary of State Agio Pereira said that the current security concerns that exist between the districts of Suai and Maliana, particularly in the remote areas, are localized incidents which have now been secured with the strengthening of five police posts.

The districts are being patrolled by a large presence of PNTL (Police) officers deployed to the area to protect and monitor communities who have been exposed to acts of intimidation, and both petty and major criminal offences by a group of organized perpetrators.

The operation has been successful. National security intelligence was utilized in accordance with community policing efforts to identify offenders. PNTL officers were able to quickly and effectively secure the region.

Investigations have identified some 35 suspects including 5 main actors. From that number, 30 have been brought to the court for preliminary hearings. Seventeen have been applied Terms of Residence (TOR), 3 were conditionally released and 10 are still waiting for the decision from the courts. The majority of followers of the group voluntarily and peacefully surrendered to the police due to the good work and collaborative efforts of the communities, local authorities and police officers.

Further investigations are still underway to determine motive; instrumental in ensuring that further incidents of this type are prevented.

Since the crises of 2006; law and order has been restored to Timor-Leste, some 150,000 IDP’s returned to homes and infrastructure has been rebuilt allowing for an unprecedented level of stability, fostering social and economic growth.

The Xanana Gusmao Government has a no tolerance policy on acts of gang violence or civil disobedience that threatens communities. All necessary action by the security sector within the principles of law, order and justice will be implemented to ensure the safety and protection of the citizens of Timor-Leste. ENDS

Image added by ETLJB: Spokesperson for the Government of Timor-Leste Agio Pereira