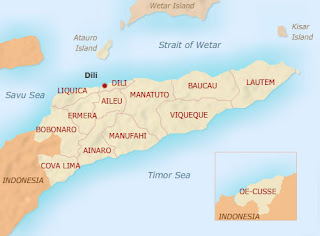 Mr. Guterres confirmed that he had conveyed his department’s plan to Parliamentary Committee B to reshuffle the East Timor National Police and reorganise the country’s security maintenance by the police.

“I meet with the Parliamentary Committee B to convey to its members information about our plan to reshuffle the National Police Institution as well as mechanisms utilised to maintain security in the country,” Mr. Guterres said.

The idea to reform the police comes amidst a wave of allegations (some publicly documented) of abuses and human rights violations by police officers such as assaulting citizens in the course of questioning in connection with the recent crack-down on allegedly organised criminal activities in the western frontier disctricts of Cova Lima and Bobonaro.

Image: A map showing the Districts of East Timor. Bobonaro and Cova Lima lie along the western border with Indonesia.
at Saturday, February 27, 2010